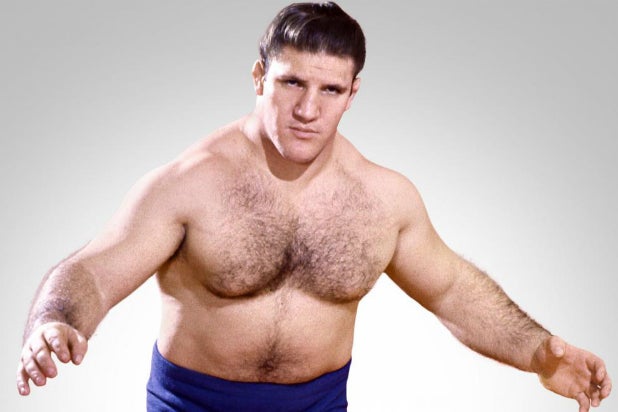 WWE Hall of Famer Bruno Sammartino has died. He was 82.

“WWE is saddened to learn that WWE Hall of Famer Bruno Sammartino passed away at age 82,” WWE said. “WWE extends its condolences to Sammartino’s family, friends and fans.”

Nicknamed “The Italian Superman,” the powerful Sammartino was the second-ever WWE Champion, defeating Buddy Rogers at Madison Square Garden in 1963 for the title. Of course in those days, the pro-wrestling promotion was not called “WWE,” but it’s the same company — just with a very different look and reach.

Sammartino went on to hold the title for nearly eight years — by far the longest reign ever. The way wrestling storylines are written these days, that mark will never be eclipsed.

The brawler eventually lost the championship to Ivan Koloff in 1971, though he won it back in 1973, becoming the company’s first two-time champ. Sammartino’s reign that second time lasted three-and-a-half years.

Bruno retired from the ring in 1981, though returned to do commentary a few years later.

Sammartino was born on October 6, 1935 in Italy. When the Nazis occupied his hometown of Abruzzo, Sammartino and his mother hid in the Valla Rocca mountains. They eventually joined Bruno’s father in Pittsburgh in 1950.

In 1959, Sammartino set a world record by bench-pressing an incredible 565 lbs. That’s when Vince McMahon Sr. discovered his new talent.

Sammartino was inducted into the WWE Hall of Fame in 2013 by Arnold Schwarzenegger, who remembered his fellow weight-lifter on Wednesday:

Bruno Sammartino was a legend. He was the American Dream personified. From his childhood in Italy hiding from Nazis to selling out Madison Square Garden 188 times as the biggest star of professional wrestling, he was a hero in every stage of his life. pic.twitter.com/29KDwT3gcA

And away from the spotlights and attention, he had the biggest heart you can imagine. I’ll miss you, Bruno.