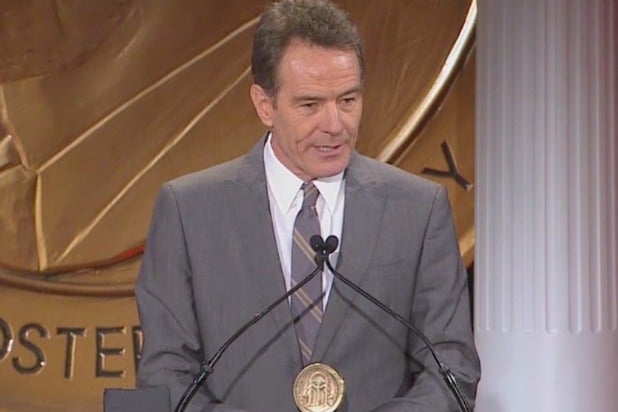 Sunday’s broadcast of the Peabody Awards will include not just the usual acceptance speeches, but also interviews with the winners — including one in which Bryan Cranston says “Breaking Bad” ended at exactly the right time.

TheWrap has an exclusive first look at the show’s interview with Cranston, the “Breaking Bad” star and producer who accepted on behalf of the show.

“It was very courageous of AMC and Sony and Vince Gilligan, our creator, to say, ‘Enough’s enough. Let’s bring it to a close.’ Like a proud athlete. I was grateful that they all decided to hang ‘em up at the proper time,” Cranston said.

The 73rd annual Peabody Awards air Sunday on Pivot and are hosted by Ira Glass. The awards honor excellence in media, and the one-hour original special will recognize 13 of this year’s 43 winners, including “Scandal,” “Orange is the New Black,” “Orphan Black” and “Breaking Bad.” Those interviewed include Tom Brokaw, Anthony Bourdain, Jordan Peele and Keegan-Michael Key.

The show is produced by Den Of Thieves, which has also produced the  MTV Music Video Awards and “American Idol.”