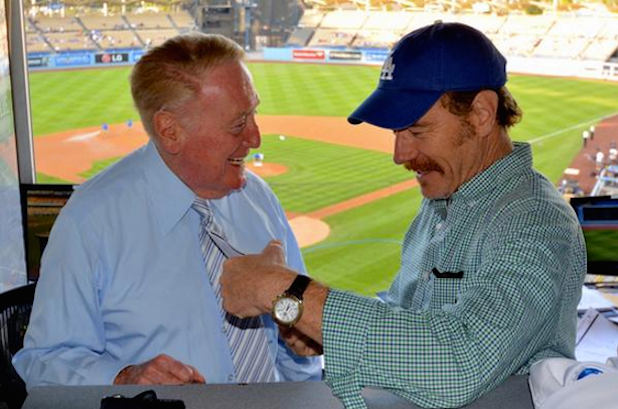 Whether he wins another Emmy or not, there’s a good chance that the highlight of Bryan Cranston‘s week will have come Tuesday night.

Cranston, a lifelong Dodgers fanatic, visited Chavez Ravine on Tuesday night and spent some time in the announcer’s booth with the one and only Vin Scully. That’s a treat for any baseball fan — the long-time broadcaster is a Hall of Famer and legend — but especially so for Cranston, who grew up listening to Scully’s voice through good times and bad.

“I grew up with Dodger Stadium. It was my home, and I knew certain things, even when times were rough or things not going well in school or my parents splitting up or whatever the case may be,” he told ESPN back in 2009. “I could always depend on the smell of the grass, listening to Vin Scully’s voice to bring back a sense of calm and safety. And it was that to me. It represented something, a touchstone, that was always there that I could always go to in times of trouble, and it was there for me… And when Vin Scully finally retires, it will be a very sad day for me.”

Cranston is a regular at Dodgers games, where he has been recognized on the big screen and thrown out the first pitch. On Tuesday, he got to perform guest PA announcer duties, and actually sign an autograph for a player — something that was sure to be a real thrill for a guy who grew up worshipping ballplayers wearing Dodger Blue.

.@BryanCranston signed a baseball for Brian Wilson. It’s wonderful on so many levels. pic.twitter.com/B3Cc3izec2