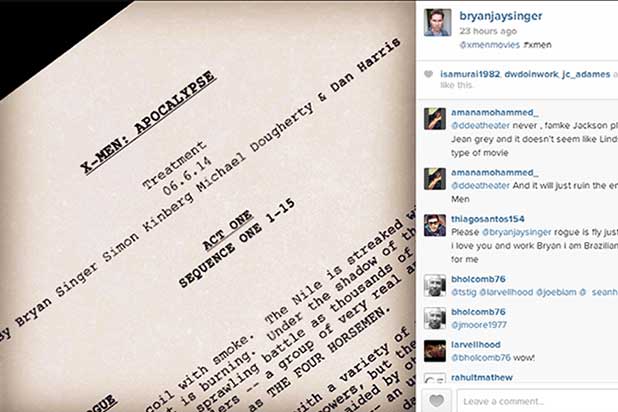 The internet’s comic book fans collectively squealed with excitement when Bryan Singer posted his first ever Instagram picture containing a treatment he co-wrote for “X-Men: Apocalypse.”

Though the writer/director’s photo was cropped tightly, the script for the eight movie in the “X-Men” franchise explicitly references The Four Horsemen, henchmen of the antagonist Apocalypse. Though their characters’ inclusion in the film was rumored, this is the first confirmation of their involvement.

The picture of the script also shows the opening shot is set in the Nile. Considering the post-credit sequence of the last film “X-Men: Days of Future Past” took place in the desert, it’s perhaps safe to assume this is picking up where the 2014 movie took off.

Unfortunately for Channing Tatum fans, there was no mention of his character Gambit.

Keep in mind, though, it’s a treatment dated “06.06.14,” and every detail of the script is likely subject to change.

The director had been notably absent from promotion for this summer’s “X-Men: Days of Future Past” due to ongoing legal troubles from a lawsuit accusing Singer of sex abuse.