April TV ratings bring May cancellations — but sometimes renewals, too.

Mid-spring marks the time of year when at-risk shows must sweat out their fates — sometimes right up until networks announce their fall schedules to advertisers at their upfront presentations to advertisers in May. Optimism has its place in Hollywood, but it ranks somewhere between actual advertising money and the feel-good awards that can sometimes keep low-rated shows alive.

TheWrap will try to help make sense of it all, charting below what scripted series have already been renewed on each of the English-language broadcast networks, what’s been canceled or just ended, and which way each of the many remaining decisions will likely lean.

So far, is season’s top-rated network in the advertiser-coveted 18-49 demographic has renewed just four scripted shows. Freshman smash-hit “This Is Us” was obviously a no-brainer, while modestly rated sitcoms “Superstore” and “The Good Place” got by mostly based on their comedic quality. “Shades of Blue” doesn’t exactly light up the Nielsen sheets, but there is no way the network was going to rock its relationship with star Jennifer Lopez just before launching her summer competition, “World of Dance.”

Thus far, nothing on the peacock-mascoted network has been canceled canceled, though we’ve known for a while that Friday show “Grimm” was ending. “Emerald City” was technically booked as a limited series, and since it’s not performing so well, no surprise second season is in the offing.

“The Blacklist: Redemption” was a nice spinoff idea, but it doesn’t hold a candle to its predecessor’s modest tune-in, so you can probably scratch that for 2017-2018. Finally, the network would probably like to forget “Powerless” altogether, so we’ve comfortably marked that as “Probably Not Returning,” too.

With everything else, we can make a case of renewal. That said, “Trial & Error,” “Blindspot,” “Taken” and even “Chicago Justice” are no slam dunks. We’ll see what NBC’s schedule calls for after the pilots are all voted on in the coming weeks. (See the chart below for a more detailed snapshot of where NBC’s scripted fare falls.) 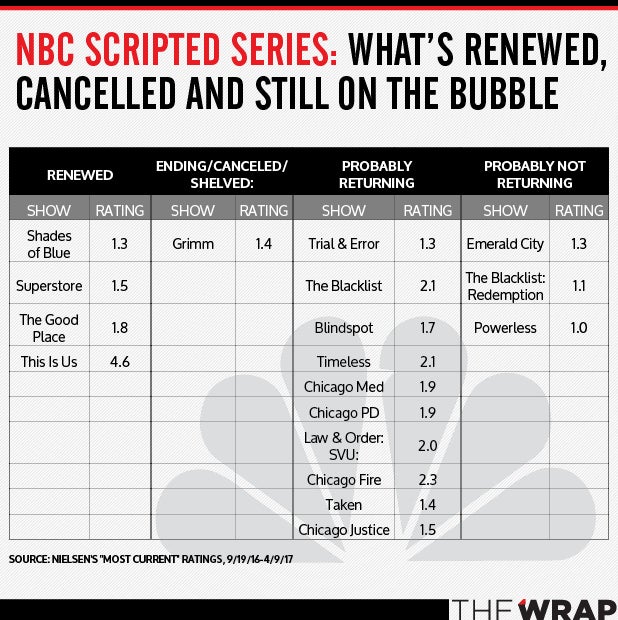 Like NBC, Fox had one show we knew was concluding: “Bones.” That doesn’t mean every other one is coming back.

Fox has a lot lined up for next fall, however: “Lucifer,” “Star,” “The Mick,” “Lethal Weapon,” “Empire,” “Bob’s Burgers” and “The Simpsons” are all officially renewed, and sources close to the program tell us “Family Guy” is definitely doing more.

Beyond those, Fox is the second-toughest network to call. (You’ll see why we say that during our ABC analysis.) Based on its ratings, “Scream Queens” probably should have been slashed a year ago, and “Rosewood” has proven it can’t hang without lead-out “Empire.” “Sleepy Hollow” likely deserved the graveyard multiple seasons ago, and sans Nicole Beharie, we just see no justification for bringing it back. As for “Making History,” that one is — you guessed it — history.

“Pitch,” “Shots Fired,” “APB” and “The Exorcist” could all take the next bus off the Fox lot too — or they could all stay. The rest seem pretty safe — though we thought “The Grinder” would be back on TV for this run.

Also Read: Jeanine Pirro Explains Why People Would Even Take Their Cases to 'You the Jury' 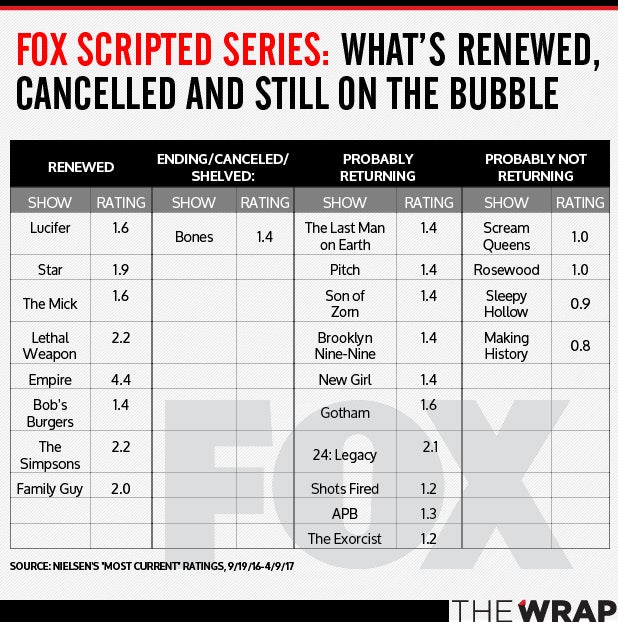 CW
No, that’s not a typo in the below chart: “Crazy Ex-Girlfriend” has been renewed again, despite it’s pretty terrible 0.3 rating among adults 18-49, thanks in large part to its love from critics and awards shows. Also coming back for another round, despite rough viewership figures, are “The 100,” “Riverdale” and “Jane The Virgin.”

At this point, we should remind viewers that the CW is the youngest-skewing broadcast network, so they’re more interested in millennials than the people at the older end of the 18-49 spectrum.

“Reign” and “The Vampire Diaries” are done for, which leaves four shows for CW to declare futures on. While chief Mark Pedowitz doesn’t like canceling anything, he’d be hard-pressed to consider more “Frequency.” And the title of “No Tomorrow” title should be taken quite literally, given how poorly the first-year series did.

Our educated guess is that “The Originals” and “iZombie” will make it back by the skin of their teeth. 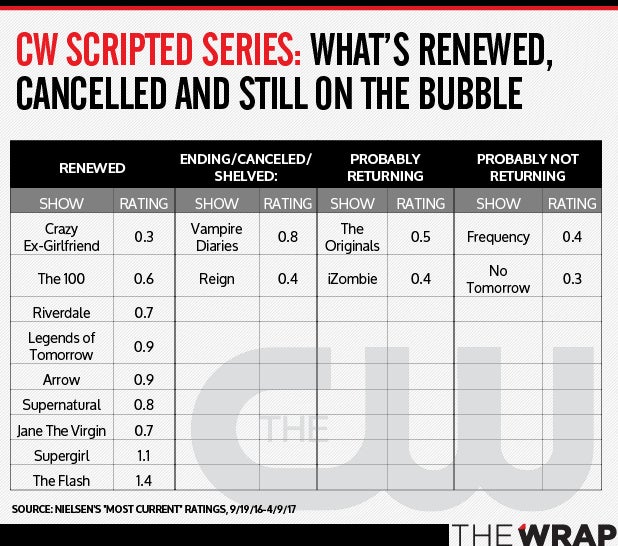 CBS
CBS is a professional broadcaster full of professionals. As such, Les Moonves has already renewed 16 series. Yes, 16. That’s the way you do it, other networks. Of course, it doesn’t hurt that CBS is once-again America’s most-watched.

Meanwhile, “Pure Genius” and “Doubt” are officially goners. Unofficially, “Training Day” has met the same fate, due mainly to the passing of star Bill Paxton.

CBS’ Saturday experiment series “Ransom” just so happens to be the lowest-rated show on all of broadcast television, so don’t bet on that one coming back to the airwaves. “Elementary” is always teetering, and “Criminal Minds: Beyond Borders” gets fewer than half the main demo tune-in as the franchise’s main offering.

As for “The Odd Couple,” well, just check out star Matthew Perry’s tweet for to gauge our confidence level in that one.

My face on the Odd Couple stage door has been painted over with green paint.I think it's safe to assume that we have been cancelled.#subtle

“Code Black” probably pulls out the paddles and pulls off a return due to its decent enough rating, which is the same argument to be made in favor of more “2 Broke Girls.” Joel McHale’s “The Great Indoors” doesn’t have bad numbers, but almost anything would do well coming out of the “Big Bang Theory” — so let’s call that one a toss-up. 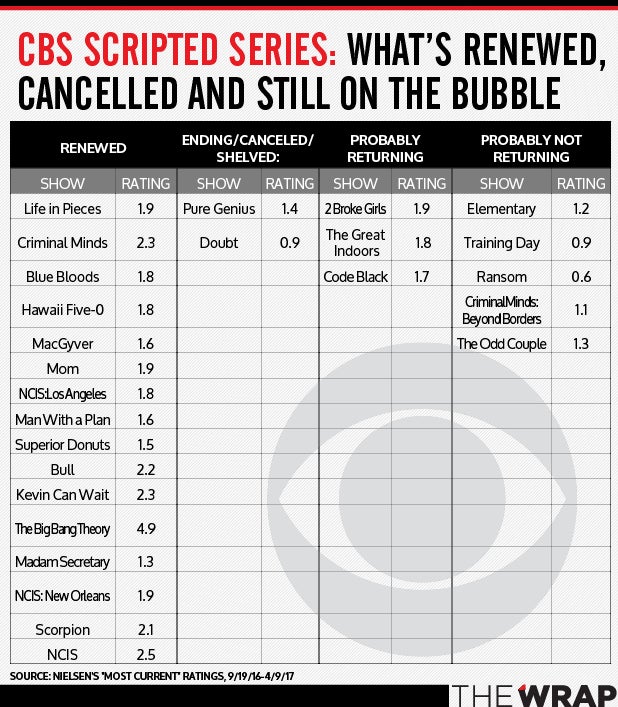 Also Read: How 'Crazy Ex-Girlfriend' Scored an Unlikely Season 3 Renewal Despite Being the Lowest-Rated Show on Network TV

ABC
ABC is still having a rough time, ratings-wise. As such, the Disney-owned broadcaster has already canceled the most series, burying three in this year’s early graveyard. Sadly, we have a feeling that “Dr. Ken,” “Secrets and Lies,” “The Catch” and “The Real O’Neals” might soon be joining them.

But here’s the case to keep each. For starters, Ken Jeong’s sitcom is a Friday show, which helps explain its1.1 rating in Nielsen’s “most current” metric, which includes a week of delayed viewing where available. “Secrets and Lies” could stick around because it has the best 18-49 demo tune-in of the bunch, and ties or beats three shows we think will earn renewals. “The Catch” is a Shondaland show and thus part of “TGIT” — and ABC would be wise to keep Ms. Rhimes happy. And “The Real O’Neals” actually has a lot of executive support internally, we’re told, so fans can hang their hats on that.

There and elsewhere, ABC is a total crapshoot. Should “Agents of Shield” come back again? Probably not, but there’s the Disney-Marvel connection to consider. Same deal for “Quantico,” though substitute “Priyanka Chopra” for “Disney-Marvel.”

“Once Upon a Time” should surprise some with another season, and “American Crime” may get the franchise tag that often keeps prestige shows in business. As for the still-very-new “Imaginary Mary,” well, we really have no idea. The silly show start solidly, but has since shed quite a bit of its audience. But we figured to end this on a positive note, and can imagine Channing Dungey sticking with a series that hasn’t really had a chance yet. 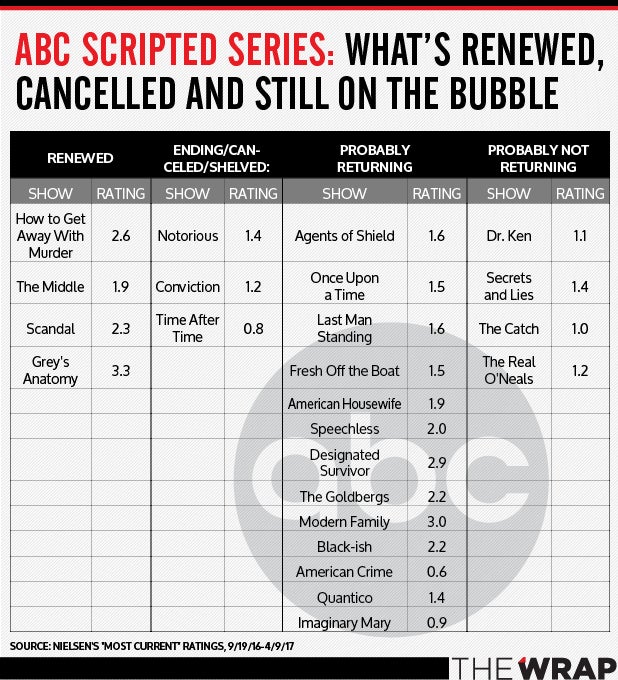