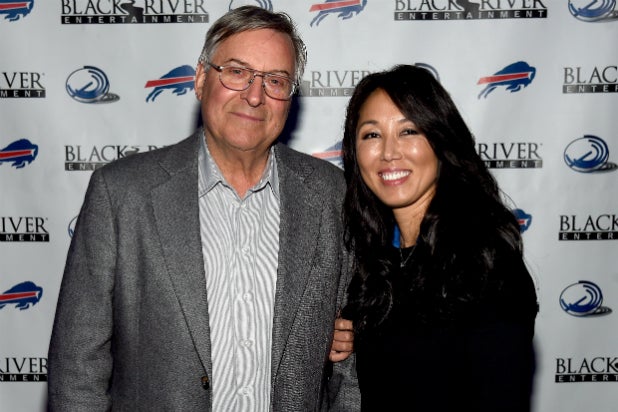 Buffalo Bills co-owner Kim Pegula has a wild idea on the whole national anthem protest controversy that’s still dominating NFL chatter weeks after Super Bowl LII. It’s admittedly a bit out there, so stick with us here: Maybe trying talking to each other?

During a panel at the MIT Sloan Sports Analytics Conference, Pegula was asked whether social activism by players is good for the business of sports.

“My own experience, I think a lot of it is just communication,” she said on Friday, according to ESPN. “I know that’s easy to say. But I know that several of our players, when I actually talked to them and actually gave them a different perspective — just like they were trying to give us a different perspective — on the impact of the business and what the impact is of what they do socially, off the game, at home and then how that affects the business side. They didn’t grow up in the sports business world. They came in on the players’ side.”

Also Read: Jimmy Kimmel Has the Perfect Excuse for His Reaction to Fergie's National Anthem (Video)

“So a lot of [Bills players] just didn’t understand or know the impact that it had on the business, the organization and the community — good or bad,” Pegula, who owns the AFC East team with her husband Terry Pegula, continued. “So I do think there’s definitely an impact. I wouldn’t shy away from it at all. I think there is a common ground. I think a lot of it is more about communicating and learning from each other on both sides and coming to some type of a compromise at some point. Sometimes you won’t be able to come to a compromise. But something usually gets done when that happens.”

The Pegulas have put their money where their mouths are on this one. They called a meeting with a group of players back on Sept. 24, 2017, which was just after President Trump famously made disparaging remarks about players kneeling during the “Star-Spangled Banner.” About a dozen Bills kneeled before that Sunday’s, with fewer dropping to a knee the following week.

Terry and Kim later released a statement calling Trump’s comments “divisive and disrespectful,” and saying the organization tried to use the remarks as an opportunity to “further unify our team.”

Also Read: Are the Buffalo Bills to Blame for Donald Trump's Presidency?

Trump actually tried to buy the Bills back in 2014 when the franchise was up for sale. (Rocker Jon Bon Jovi also pledged interest in the team.)

“I know so many people in Buffalo,” Trump told the city’s WBEN-FM at the time, “and they have asked me about looking at that, and I certainly would look at it.”

Trump reportedly submitted a bid of $1 billion in cash, but was beaten out by a $1.4 billion cash bid from the Pegulas. The rest is (American) history.