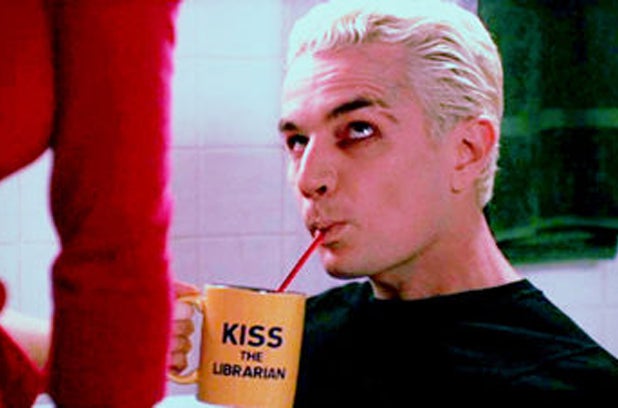 James Marsters as Spike on "Buffy the Vampire Slayer"

“Buffy the Vampire Slayer,” let’s face it, is the story of an inclusive (at least in Fantasy terms) group of friends, led by a young woman, who fight villains that are basically various expressions of patriarchy. What I’m saying is, speaking as a longtime fan, it feels especially relevant right now.

Co-star James Marsters, whose portrayal of the villain-turned-antihero Vampire Spike was one of the show’s enduring highlights, seems to agree. Speaking to the A.V. Club to mark the show’s 20th Anniversary, Marsters was asked what, in his opinion, the show can teach audiences today. His answer: “don’t give up.”

“Oh, my god, it’s so relevant. The world is hard. The world is not perfect, but we can’t give up. If I could condense the theme of Buffy into three words, it’s those: ‘Don’t give up.’,” Marsters said.

“It began just as the story of an adolescent who’s going through a period in her life where she realizes that the world is messed up,” he continued. “Her parents don’t always know what they’re talking about, her teachers don’t always know the subject matter they’re teaching, and we’re going to watch to see if she gives up. If she’s going to continue to try to find answers and engage with the world or just going to cocoon and give up. I think it’s well done enough that someone who’s older or younger than that can still identify with that and say, ‘Oh, I know what that feels like.’ It’s hard to wake up every morning and not give up and [instead] say, ‘I’m going to try to help out today.’ I think that’s very important right now.”

Marsters didn’t elaborate further on whether or not he was thinking specifically about current politics, but considering the high probability that the mood he’s addressing is shared by a considerable number of the show’s biggest fans precisely because of politics, we’ll hopefully be forgiven for reading into it.

Marsters also had a lot of interesting insight into the character he played over seven years and two separate shows, as well as a couple of cool anecdotes. For instance, the time Joss Whedon insisted on reshooting a scene in a late-series episode after seeing what another director had done with the material, vastly improving it, but adding 12 hours on top of the almost 20 hours they’d already spent on it. Definitely read the whole thing.

"Queen of the Damned" made waves when it was released in 2002 -- not because it was critically-acclaimed, but rather because it was the beloved R&B singer Aaliyah's last on-screen performance. On the movie's 15th anniversary, here are 10 things you probably didn't know about Aaliyah and the feature film that was released six months after her death following a small plane crash in August 2001.

TheWrap has teamed up with IMDb to share these little known facts. Go to IMDb.com for more trivia, goofs and quotes from the fantasy-horror film.