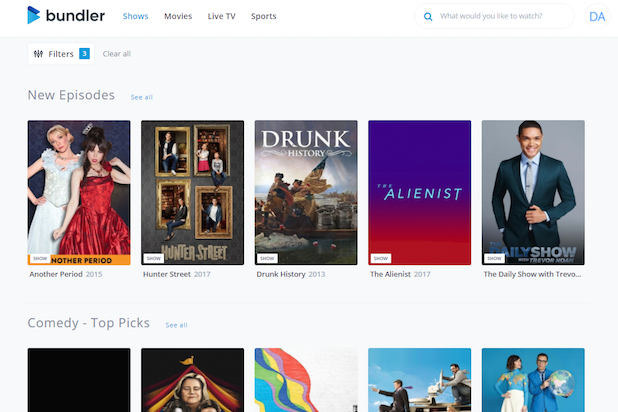 In the era of “too much TV,” keeping track of your favorite shows is becoming a bigger headache — and that’s where startup Bundler can help out.

The Los Angeles-based startup launched its Bundler Viewing Guide on Wednesday, aiming to streamline everything you don’t want to see, while amplifying shows that are in your wheelhouse. Founder and CEO Daniel Ornstein told TheWrap the inspiration was simple: As more streaming services come out, Bundler wants to become the “default stop” for customers to follow their top shows.

“The goal is to create a simple user interface on top of the fragmented [TV] landscape, that we believe is only going to get worse,” said Ornstein. “On the search side, the goal is in less than 30 seconds to dig into a show, figure out which episodes are available and where.”

In other words: Bundler wants to be the Google Search for cord-cutters, directing users to the right platform for a show, while creating a “taste profile” to recommend fresh programming. Users can also make show lists and track live sports on the site.

The Warner Bros. alum anticipated an obvious question I was waiting to ask — why not just depend on your Apple TV’s search function? Ornstein said most devices prioritize getting users to pay for content, instead of pointing them to shows they’re already shelling out for. “We do think there’s a place for a neutral aggregator,” as Ornstein put it.

Right now, Bundler is a web-based, mobile-friendly platform. But Ornstein said they’re working on an app for Roku and Apple iOS, knowing it needs to be available where hardcore streamers are if it’s to become their TV “companion.”