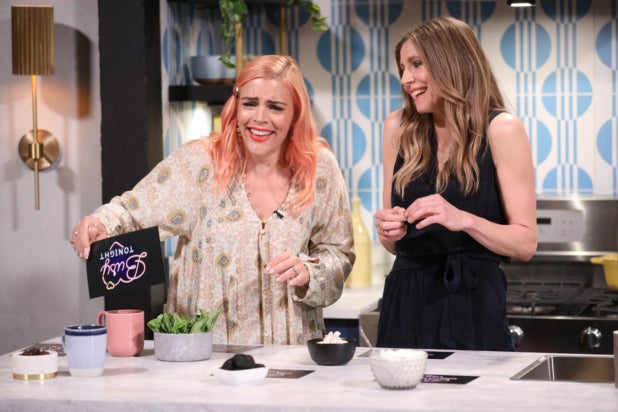 E! has canceled late-night talk show “Busy Tonight” after just one season. Host Busy Philipps tweeted early this morning that she is shopping the show elsewhere.

“Hey guys. Just wanted to let you know my show ‘BusyTonight’ won’t be continuing on the E network after May 16,” Philipps wrote on Twitter. “I’m beyond proud of what we’ve built in such a short period of time and I’m hopeful we can find the right place for the show to live on. Goodnight you guys. I love you.”

Hey guys. Just wanted to let you know my show BusyTonight won't be continuing on the E network after May 16. I'm beyond proud of what we've built in such a short period of time and I'm hopeful we can find the right place for the show to live on. Goodnight you guys. I love you.✨

Also Read: Tina Fey: Women Have Made Progress in TV Business, but 'Films Are a Mess'

The math works out to eight more shows on E!, Philipps added on Instagram.

“Look, we’re meeting with people and seeing if there’s another place that makes sense for it to go,” Philipps said in an Instagram Story. “Because I would like to continue doing it. We would all like to figure out a way to continue to make… And look, it’s kind of wild because we’ve only been doing the show for a relatively short period of time, like five months, six months now, and in that time I feel we’ve been able to accomplish so much creatively and I guess culturally and I think that we’ve had a real point of view. And I’m so proud of all of the things that we’ve done and that we’ve been able to do. And I feel like the show is really successful in that way.”

“I don’t know what to say,” she continued. “We’ve talked to some people and we are trying to figure out if there’s a place that makes sense for our show to go to, and hopefully we will be able to figure that out. I think we will. I have faith in me. I hope that, you know, we can continue to do the show somewhere else. I hope that we figure that out because it does seem lame that there would be just, like, just be one woman in late night at a time. But I don’t know, I love our show, I really do. And I love what we’ve done in, like I said, a relatively short period of time. It’s crazy, it’s crazy. I have truly the most amazing people that work with me. Our creative staff is like 89% female, it’s just an office full of dope women that f–king get it done.”

“‘Busy Tonight’s’ last episode for E! will air Thursday, May 16 with a special celebratory half-hour,” a spokesman for E! told TheWrap. “Busy is a hilarious and charismatic talent and we are grateful to the entire ‘Busy Tonight’ team who has delivered countless laughs and heartwarming moments in what will be over 100 episodes.”

For the next week or so, “Busy Tonight” will air Monday through Thursday at 11:00p ET/PT on E!