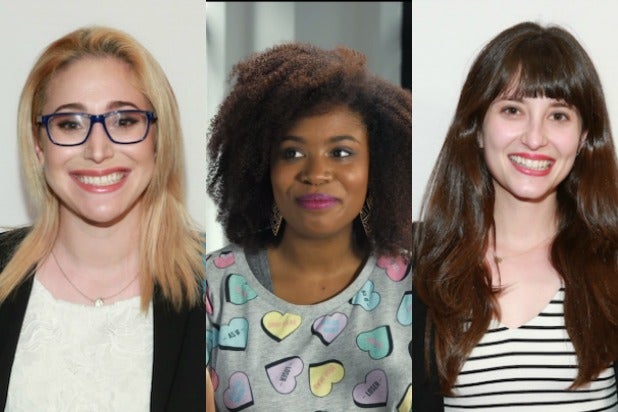 The recent firing of two BuzzFeed staffers for moonlighting on a web series produced by America Ferrera highlights an age-old quandary that young creatives face now more than ever: Are the financial benefits and larger audiences of working for major media companies worth the tradeoff of losing control and ownership of your content?

For some millennials, independence matters most — especially since major companies like BuzzFeed typically sign digital personalities to exclusive contracts that give them ownership of all content created and restrict their ability to work on outside projects.

“There’s not enough money in the world to not own your ideas because, at the end of the day, that’s all you’re going to have,” Brooklyn-based Akilah Hughes, a comedian and writer with over 100,000 subscribers on YouTube, told TheWrap.

For some up-and-comers, the appeal of going to work for a bigger outlet is obvious, allowing access to other talent, technical resources and a much larger platform to build their brands.

For example, BuzzFeed’s “Try Guys” — Eugene Lee Yang, Ned Fulmer, Zach Kornfeld, and Keith Habersberger — have risen from obscurity and amassed a large online following because of the series. But when not in front of the camera specifically for “Try Guys” videos, each member also writes, produces, and/or directs videos for the channel that frequently have well over 1 million views.

“It’s a good problem to have, to have worked at a company where you’re making money making stuff,” comedian Allison Raskin, a former BuzzFeed video creator, told TheWrap. “That is a thing that didn’t exist 10 years ago, that you could graduate from college with a film degree and then immediately be making videos that people are watching.”

But some are rebelling against the constraints of creating content in a more corporate environment, from deadlines to strictures on outside assignments to exclusivity clauses.

“We’re investing heavily in you, and we do ask for a real commitment in return. Concretely, this means that the work you do while you’re on BuzzFeed’s staff belongs to BuzzFeed, and that you can’t work for other productions without our permission,” Frank wrote. “Being a part of BuzzFeed is a full-time job, with many benefits and opportunities, and as with any full-time job you are expected to be fully committed to your work and collaborating with your colleagues while you are here.”

In addition, the non-compete clauses in many digital media contracts can have lingering side effects for creators who have career goals that extend beyond working at a single company — even after they leave.

Take Raskin and Gaby Dunn, a comedy duo who created the YouTube show “Just Between Us” and left BuzzFeed after roughly eight months despite becoming some of the most popular stars on the site’s video channel.

“My fear is that you get out of a two-year exclusivity deal and you’ve had to turn down working with anyone who isn’t connected with one company,” Dunn told TheWrap. “You haven’t worked with anyone else, any directors, any writers, any whatever outside of that one place. You haven’t made anything that you own.”

Not every digital media company is as restrictive as BuzzFeed. Dunn said she was allowed to freelance for the New York Times when she was a staff writer at the Daily Dot — so long as her Daily Dot affiliation was mentioned in her bio.

But entertainment and copyright attorney Larry Zerner said it is pretty for media companies to own creator content.

In this new media space, Zerner noted, people are quick to think that media outlets owning creators’ content is horrible, but no one thinks twice about it when it comes to TV and news media. “Of course you can’t take your Times articles when you move along to someone else,” he said.

Zerner said that once creators get enough leverage they can start to renegotiate their terms.

“If you build up the clout, then you can push back at some of this,” he said. “It becomes a balancing act of how much money they’re paying you, how long is the non-compete and how much clout you can get.”

That approach has worked for Hughes, who has re-negotiated contract terms with digital media companies.

“I freelance for almost every media site — truly, I’ve done things for almost every media site — and they always give me a contract that I have my agent go over,” said Hughes, who recently accused BuzzFeed of stealing the idea for one of her videos and called on advertisers to pull sponsorship deals. “I’ve been able to avoid crappy deals because I’ve always prioritized not being exclusive.”

But for many newbie video and content creators, the appeal of an offer from a big media outlet can blind out the particulars.

Raskin said her father, a lawyer, found several objectionable stipulations in her BuzzFeed contract and she sent a heavily marked version to the company’s HR department. She claimed that a human resources employee told her that all employees had to sign the same contract, but that the company wouldn’t hold her to it.

Being young and eager to start her career, she agreed to sign. To protect herself, she saved the Google chats she had with HR.

For many, the benefits of a steady income and considerable resources are worth the restrictions — even for a brief time. Dunn and Raskin are aware of the added financial challenges they face on their own, paying their own video crew and pursuing brand sponsorships by themselves.

“Business is always business, and sometimes you think that a company cares about you in a way that they just can’t,” Dunn said. “You always have to make sure you’re looking out for yourself.”

Raskin said her “wake-up call” came after realizing how binding — legally, financially and creatively — her contract with BuzzFeed was going to be on her career.

“I remember having a conversation where I said, ‘I don’t understand why I can’t go for a month, shoot a movie, make my year’s salary that I would make at BuzzFeed, and then come back and still be part of this family,'” Raskin said. “At the time, [BuzzFeed] said, ‘Because that’s not fair to the other employees who can’t do that.'”

“It was a weird kind of Communist way of running a company,” she said. “But in reality, that doesn’t work for people who aren’t on a farm. If you’re living on a commune and you’re all just making food for everybody to eat the food, that kind of mentality works, but the entertainment industry is not like a socialist industry.”