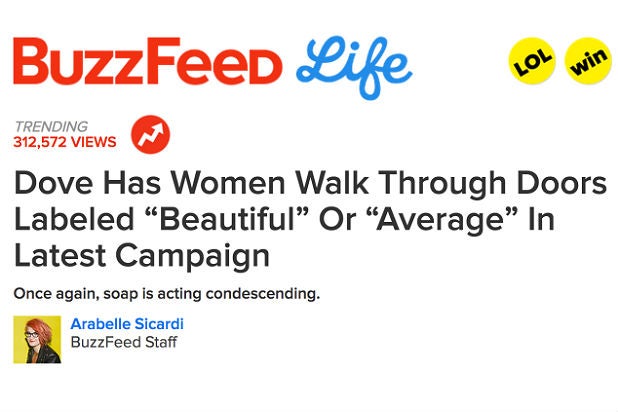 Just one day after BuzzFeed deleted a post critical of advertiser Dove, editor-in-chief Ben Smith has released a mea culpa apologizing for the site’s actions.

Appreciate the criticism. We just reinstated two posts and I sent this note to staffers. pic.twitter.com/YodxHiQmt2

In her article titled “Dove Has Women Walk Through Doors Labeled ‘Beautiful’ Or ‘Average’ In Latest Campaign,” Sicardi wrote:

“You know, maybe those women described themselves as smart, funny, generous, kind, but we’ll never know, because the soap manufacturer wants to tell us how we feel about ourselves. And then fix it for us. With soap.”

But on Thursday, BuzzFeed deleted the post and replaced it with an editor’s note saying, “We pulled this post because it is not consistent with the tone of BuzzFeed Life.”

The post in question, plus another recently yanked article, have since been reinstated.

According to Gawker, this isn’t the first time the site has pulled one of its articles under dubious circumstances. The media news site claims BuzzFeed scrapped more than 4,000 older posts last year alone because they “didn’t age well” or plagiarized other outlets.

The disappearance of the article about Dove’s TV spot, which shows women choosing between a door that says “Average” and another one that says “Beautiful,” prompted a scathing post by Gawker which insinuated BuzzFeed pulled its article due to advertiser pressure.

To that accusation Smith replied, “The answer is no.”

I blew it. Twice in the last couple of months, I’ve asked editors — over their better judgment and without any respect to our standards or process — to delete recently published posts from the site. Both involved the same thing: my overreaction to questions we’ve been wrestling with about the place of personal opinion pieces on our site. I reacted impulsively when I saw the posts and I was wrong to do that. We’ve reinstated both with a brief note.

You also have the right to ask about whether we did this because of advertiser pressure, as Gawker suggested. The answer is no. I field complaints all the time from companies and individuals, including advertisers, and see it as my job to shield you from that pressure.

We obviously need to do a better job of giving guidance to writers and editors on the place of personal opinion on the site. That’s an ongoing conversation in which I’d love your input, and we’ll keep you posted.

We’ll have a quick all-edit meeting at 5:00 EST in the back canteen in New York if you’ve got questions; we’ll circulate dial-in information for other offices.

BuzzFeed did not immediately respond to TheWrap’s request for comment.