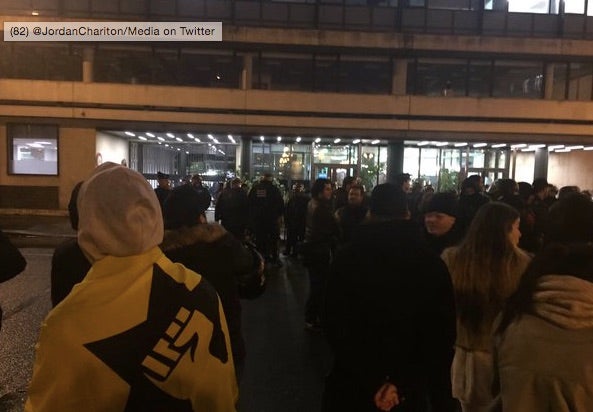 BuzzFeed news reporter David Perrotin was assaulted on Thursday at a Paris protest outside the offices of news wire Agence France Presse by members of the extremist Jewish Defense League group.

BuzzFeed reported that a little before 8 p.m., a protester spotted Perrotin and said, “It isn’t good to take photos” as protesters threw eggs and other items at the building housing AFP.

Perrotin was asked if he was a journalist, and declined to answer, but the female protester already knew his identity.

“I know who you are, I have information about you. You are David Perrotin. Wait, I’ll tell the JDL that you’re here,” BuzzFeed reported the protester said.

In response, Perrotin tried to leave the crowd as police motioned him to come to the front of their line in front of the AFP building. As he ran, about a dozen protesters wearing masks and helmets barreled into him.

They struck him in the back and head and police inadvertently struck him before recognizing he was a reporter. They brought him into the AFP building, where staff tended to Perrotin before he was released 45 minutes later.

The Jewish Defense League didn’t answer BuzzFeed as to why its protesters assaulted Perrotin, responding to an inquiry with a blank email.