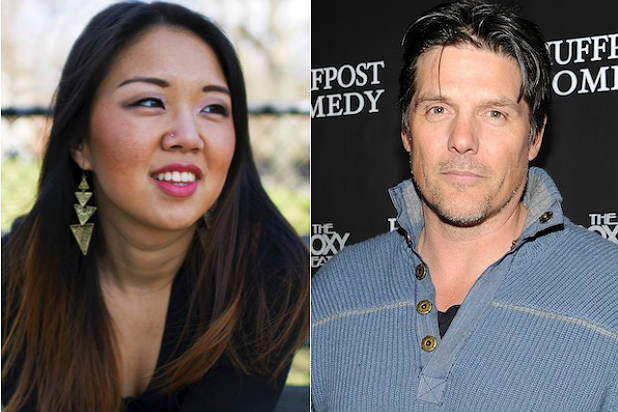 BuzzFeed News’ Susan Cheng published a piece Monday alleging that “Mad Men” actor Paul Johansson sexually harassed her during an interview at the site’s offices in late April. But the actor’s publicist Cheryl McLean, who was present, disputed Cheng’s claims in an interview with TheWrap, saying the women at the shoot acted like fans, not journalists.

“At no point did the interview get out of hand where, as a professional publicist, I felt I needed to take him out of the room,” McClean told TheWrap. “There was nothing inappropriate going on.”

Cheng’s piece claimed that the actor joked, “I’m sweating like a rapist,” repeatedly put his hand on Cheng’s back and when shown the conference room said, “Do you ever take people in there and make out with them?”

But McLean recalled a very different scene during the shoot than what was described by Cheng, an editorial assistant. She said that the BuzzFeed staffers acted thrilled to meet a star of  “One Tree Hill,” in which Johansson played Dan Scott, the father of James Lafterty’s popular lead character Nathan Scott. He played ad executive Ferg Donnelly on “Mad Men.”

“The girls that were there were obviously hardcore fans from ‘One Tree Hill.’ They knew everything about it,” McLean said. “At times, I almost felt they were talking to him like he was Dan Scott. It was a little strange so I was like, ‘Did fiction and reality cross lines and is that happening right now with people reading this?'”

McClean claimed it was not “awkward” as described in Cheng’s piece and Johansson was a “complete gentleman” to them. She recalled that there were four women in the room along with Johansson and not one spoke up during the course of the interview.

Once the interview wrapped, McLean said Cheng followed them to the door. At one point, the actor put his hand on Cheng’s upper back as he opened a door and said, “After you.” McLean said Cheng initiated a hug with Johansson as they parted ways.

McLean has run her own publicity firm for the last 15 years and Johansson has been a longtime client with whom she’s never experienced any issues.

The BuzzFeed feature published on May 4 was titled “13 Ways To React To Dicks At Work, As Told By Paul Johansson.” The idea evidently was in reference to Johansson’s typecast toward “bad guy” roles on television. McLean notes that he played a villain on “90210” and “One Tree Hill,” someone she said fans loved to hate. On “Mad Men,” Johansson’s character Ferg Donnelly sexually harassed Joan Harris’ character.

About a week later, McLean was shocked when Cheng contacted her saying she was about to publish an exposé on “the incident” and wanted to know if Johansson had any comment. McLean said she was completely blindsided.

Johansson’s lawyer Andrew B. Brettler responded to the BuzzFeed inquiry with a warning that the claims were “reckless and defamatory.” BuzzFeed furnished an excerpt of the letter at the bottom of the original piece.

The controversy surrounding Johansson has been compounded by aggregated news of Cheng’s BuzzFeed post, which condemn Johansson without getting his side of the story, and seem to confuse the actor with the unsavory characters he often plays. “People don’t really know how Paul Johansson really is, but they are making these comments. That rush to judgment and how they keep bringing up his characters, it’s just so unfair,” she said.

TheWrap also spoke with criminal litigator and former sex crime prosecutor Steve Meister who said that Cheng’s decision to publish the story may affect her future as a journalist.

“My question is if she’s going to practice journalism this way, how many more interviews does she think she’s going to get? I’m not saying someone should subject themselves to harassment or mistreatment or abuse, but, at the same time, it’s difficult to determine what really happened,” Meister told TheWrap. “What I think is that in journalism school, they teach you to not become the story. She, for good reasons or for bad reasons, has chosen to become the story. That’s her decision. Only she can be the judge of whether that was the right thing to do.”

“Paul’s a good guy and he’s a terrific man,” she said. “I want that conveyed because I think somebody saw an opportunity to advance their career and get their name in the spotlight for a few minutes and that’s just what happened.”

BuzzFeed’s Susan Cheng has not yet responded to TheWrap’s request for comment.