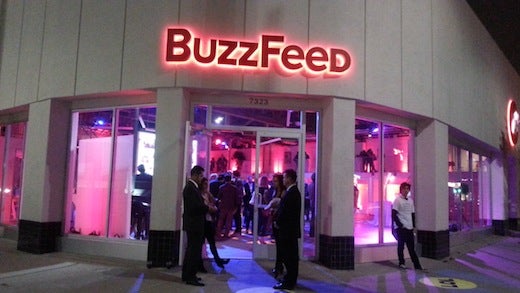 BuzzFeed has become the latest target of ultraconservative media outlets after a former writer leaked an online conversation between some of the site’s employees joking about Donald Trump being assassinated.

The furor was started by Tim “Treadstone” Gionet, a former employee for BuzzFeed who supports Trump and libertarian policies and who now tweets under the alias Baked Alaska.

Gionet leaked alleged screen grabs of a conversation between his former colleagues on Slack, a cloud-based communication app, to the right-wing site Big League Politics. In the screencaps, members of BuzzFeed’s entertainment division make off-color jokes about Trump getting killed during a conversation that took place during last year’s campaign.

“It’s so crazy to me that [Trump] has already gone this far,” BuzzFeed employee Kari Koeppel says, “and that people actually take him seriously.”

After the conversation was made public, Big League Politics writer Cassandra Fairbanks criticized the BuzzFeed employees for their remarks on the closed network, describing Thornton’s words as her “[wishing] for Trump’s assassination as co-workers laughed and cheered her on.” The story has made the rounds in pro-Trump circles, including being featured in a blog post by alt-right leader Mike Cernovich. Gionet himself has been critical of his former employer, accusing the site of treating him unfairly because of his political views

Ben is lying, I was treated very unfairly at BuzzFeed when I came out as a Trump supporter. They openly wish someone will assassinate Trump. https://t.co/LssbKtOoiW

Also Read: Half of Americans Get Their News From Facebook, But Few Trust the Source

This isn’t the first time Trump supporters have come down on the president’s critics for glib comments about violence against him. Madonna was criticized for her speech made at the Women’s March in January, during which she admitted that after the election, she had thought about “blowing up the White House.” Madonna later said that critics had taken her remarks “wildly out of context.“

In a statement to TheWrap, BuzzFeed spokesman Matt Mittenhall pointed out that no one in the leaked conversation is a member of BuzzFeed’s news division.

“While the remark in question is regrettable, it was made in private by someone who is not a reporter nor even an employee of BuzzFeed News,” the statement reads. “Attempting to turn a throwaway comment from an entertainment employee into evidence of bias at an affiliated news division is ludicrous.”