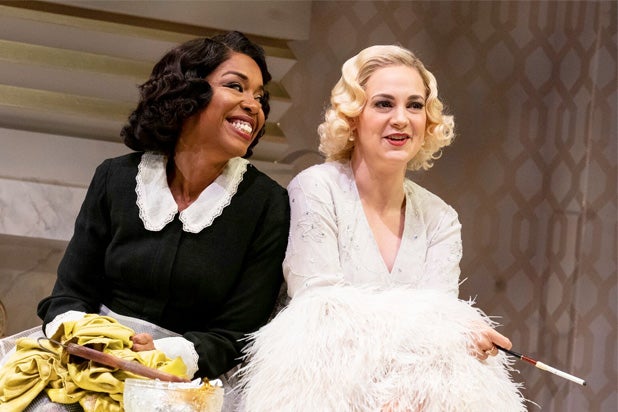 Lynn Nottage is one of the finest playwrights of her generation, the winner of two Pulitzer Prizes for searing and topical plays such as “Ruined” and “Sweat.” Her finest play may be 2003’s “Intimate Apparel,” about a black seamstress living in a women’s boarding house in early-20th-century New York City — which is begging for a major New York revival.

So it’s puzzling that Off Broadway’s Signature Theatre this season has chosen to revive two of Nottage’s more ephemeral comedies, first “Fabulation, or the Re-Education of Undine” and now “By the Way, Meet Vera Stark.”

It’s not that there aren’t serious issues of race and media representation embedded in “Vera Stark,” which centers on a maid who becomes an early black film star in golden-age Hollywood, but director Kamilah Forbes’ production manages to exacerbate this over-long show’s weaknesses.

What Nottage has written as satire instead comes off as farce, and scenes meant to send up both outdated performance styles and modern-day academics turn them into broad caricatures that even the director of a Tyler Perry sitcom would ask to tone down a few notches. (Warner Miller, as a foot-stomping and wildly gesticulating professor, is a particular offender.)

Jessica Frances Dukes is appealing but slight as Vera, a character modeled on both Theresa Harris and Hattie McDaniel, who became the first African American to win an Oscar for her role as Mammy in 1939’s “Gone With the Wind.”

Jenni Barber has the hauteur as Gloria Mitchell, the white movie star whom Vera has known from childhood who is both her employer and, later, co-star.

But except in the forward-jumping and highly meta second act, when they re-create a joint interview on a 1970s TV show after their Hollywood careers have petered out, neither manages to ground their performance in a way that feels true to the era, to the medium in which they’re working or to the thrust of the play and its message about the perhaps necessary compromises artists must make just to get work.

And alas, neither holds up to Jo Bonney’s original production, staged just eight years ago at Second Stage, which starred an actual movie star, Sanaa Lathan, as Vera, playing opposite the remarkable Stephanie J. Block.

“Vera Stark” has some timely things to say about the challenges facing black artists in classic Hollywood — but it presents a tonal challenge to even the most talented companies that this production can’t quite meet.