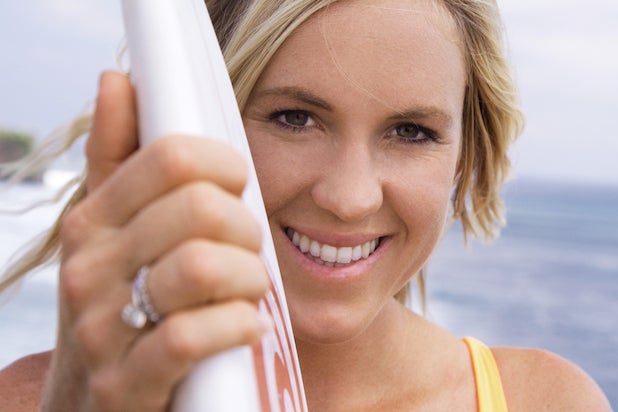 Byron Allen’s Entertainment Studios Motion Pictures has acquired the worldwide rights to “Bethany Hamilton: Unstoppable,” a documentary about the famed competitive surfer Bethany Hamilton who lost her arm in a shark attack when she was a teenager.

ESMP will release the film in U.S. theaters on July 12.

“Unstoppable” tells the story of surfer Hamilton, who was attacked by a 15-foot tiger shark while surfing at age 13, causing the loss of her left arm.

But not only did Hamilton survive the attack, she was back on the competitive surfing circuit just a year later. More than a decade later, Hamilton, now a mother, undertakes her greatest challenge: chasing a toddler and the biggest wave of her career. “Unstoppable” is the untold story of the heart of a champion and her resilience against all odds to become one of the leading professional surfers of our time. Hamilton is continuously rewriting the rules on being a fearless athlete, and brings new meaning to the phrase “surfs like a girl.”

Hamilton’s story was also adapted into a feature film called “Soul Surfer” back in 2011.

“‘Bethany Hamilton: Unstoppable’ is an inspiring and powerful documentary,” Byron Allen, Founder/Chairman/CEO of Entertainment Studios said in a statement. “We know that viewers around the world will be uplifted by Bethany Hamilton’s incredible tale of survival and success!”

“Releasing ‘Bethany Hamilton: Unstoppable’ into theaters is a dream come true and I am beyond thrilled to be working with Byron Allen and Entertainment Studios Motion Pictures,” Lieber said. “This film was meant for the big screen and I’m excited for people to hear the incredible sound mix by Dolby Atmos and the original score by Kris Bowers. I put my heart and soul into creating a film that would truly immerse the audience into Bethany’s inspiring story.”