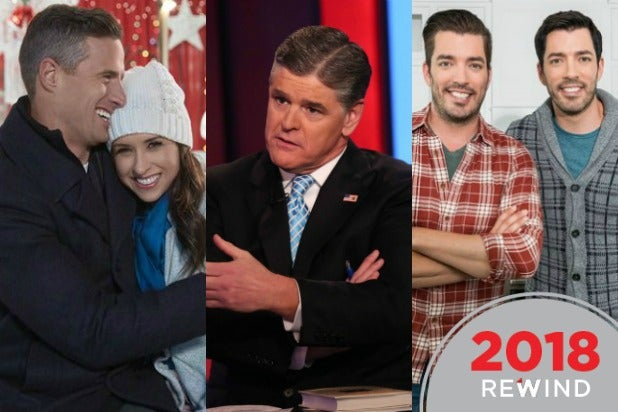 Somehow, mercifully, 2018 is almost over. Before we bid it goodbye and dive into a (hopefully) much better 2019, let’s look back at how the year treated our favorite cable channels.

For the third year in a row, Fox News Channel was the most-watched network on cable, according to Nielsen ratings. That claim holds true for both primetime (8 p.m. to 11 p.m.) and total day (6 a.m. to 6 a.m.). ESPN was again runner-up.

MSNBC, HGTV and USA Network rounded out the Top 5 primetime cable channels, according to Nielsen’s Live + Same Day data through Dec. 4. TBS, TNT, History, Hallmark and ID make it an even top 10. Something called Comedy.TV ranked dead last in the study, which encompassed 109 networks.

The below Nielsen rankers are in thousands, which means Fox News averaged 2.482 million primetime viewers. Comedy.TV averaged 1,000 total viewers for the same hours.

For this story we ignored delayed viewing, which skews hard against news and sports programming. The rankings would change if we included catch-up tuning — and not just among cable news and the ESPNs of the world. Using three days of delayed viewing, USA would leapfrog HGTV, extending the NBCUniversal cable channel’s entertainment-only win-streak to 13 years.

Below is how the cable channels stack up on a 24-hour basis. Readers can see Nickelodeon jump up on the list, which makes sense considering kids are usually in bed for primetime. All-day news channel CNN also moves up in the rankings, as does ID, which has a strong daytime appeal to stay-at-home moms.

History channel, whose audience skews old and male, falls out of the top 10 here. Comedy channel TBS also doesn’t do so hot when factoring in the full day.

And yes, in case you were wondering, Comedy.TV stays exactly the same.

Need to IMMEDIATELY known more about Comedy.TV? So did we.

Some say laughter is the best medicine. It’s true. Standup comedy has been known to cure everything from bad moods and frowns to fits of pouting. So for those who need a heavy dose of hilarity, try a spoonful of “Comedy.TV.” With no traffic jams, parking debacles, or two-drink minimums of the local comedy clubs, the most clever comedians jump onstage for a full-fledged funny fest.

Find out if the channel is available in your market here. Let’s get those stats up in 2019!