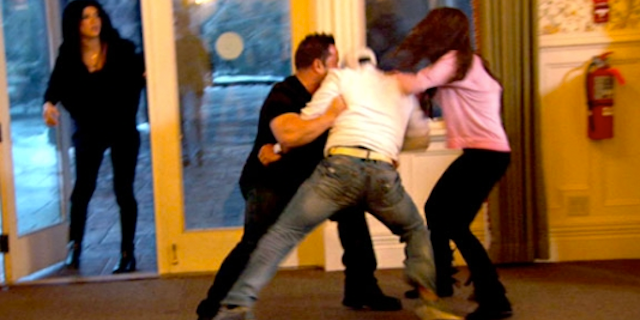 Viewers flocked to Bravo on Sunday evening to see in-laws Joe Giudice and Joe Gorga maul each other on "The Real Housewives of New Jersey."

The episode that aired Sunday at 8 p.m. drew 2.7 million total viewers and 1.5 million viewers in the advertiser-coveted Adults 18-49 demographic. That represents a 24 percent and 20 percent increase over the previous week's episode, respectively.

Those numbers give Bravo the No. 1 spot on cable among Adults 18-49 in the 8 p.m. hour that night. It also earned the top spot among all ad-supported cable channels for total viewers.

"Real Housewives of New Jersey" also helped to give Andy Cohen-hosted "Watch What Happens Live," which airs its fourth anniversary episode on Tuesday at 11/10c, its largest viewership of the season.

The brawl between Teresa Giudice and Melissa Gorga's husband broke out during, of all places, a family retreat in which the feuding family members were to take part in counseling and team building exercises. See which Joe comes out on top when "RHONJ" airs next Sunday at 8/7c.

New Jersey is the franchise's second most watched series after "The Real Housewives of Atlanta."