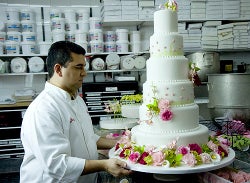 TLC has decided to slot "Cake Boss" in the slot filled by "Jon & Kate Plus 8" after the latter reality show airs its final episode Nov. 23.

"Cake Boss," now in its second season, features Buddy Valastro, owner of Carlo’s Bakery in Hoboken, N.J. It will take over for "Jon & Kate" at 9 p.m. Mondays beginning Nov. 30.

Meanwhile, Jon Gosselin on Thursday filed a $5 million claim against TLC, saying the network and its representatives damaged his reputation and career by preventing him from working with other media outlets.

The suit, filed in Maryland, claims the network contacted such outlets to persuade them to stop dealing with the disgraced reality-show dad.

Gosselin’s suit comes in response to a suit filed a month ago by TLC. The network’s suit alleged Gosselin  violated his contract by making paid and unpaid appearances on other TV outlets, and claimed TLC had lost more than $30,000 as a result of Gosselin’s alleged disregard of his contractual obligations.

As for "Jon & Kate," the show will end after its Nov. 23 finale, which will feature Jon and Kate Gosselin sitting down to "provide new insights on their recent life events," including their split, according to TLC. The series aired for five seasons on the cable channel.

It appears that the previously discussed "Kate Plus 8" will not be filling the slot as a regular series; it could air as occasional specials. Kate Gosselin has shot a Telepictures talk show pilot with Food Network’s Paula Deen, and TLC reportedly is developing a show for her as well.