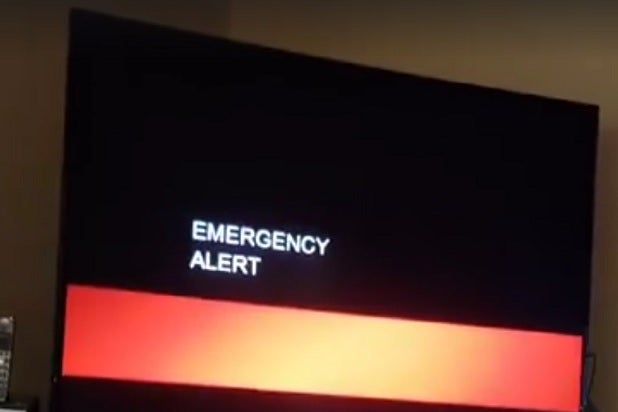 Forget flash-flood warnings — some television viewers received a much more dire alert from their televisions on Thursday.

Stacy Laflamme of Lake Forest, California, likened the voice to that of Adolf Hitler.

“It almost sounded like Hitler talking,” Laflamme, who was watching HGTV via Cox Communications when she received the message, said. “It sounded like a radio broadcast coming through the television.”

Spectrum cable customers in the area also received the alarming doomsday warning. Such as Diamond Bar resident Erin Mireles, whose enjoyment of Bravo programming was cut into with the much heavier fare.

“I was definitely startled, ’cause the volume increased exponentially,” Mireles said. “I wasn’t alarmed in the sense of thinking something was wrong, ’cause I assumed it was some sort of hack. My channel changed back to Bravo after a couple minutes.”

Cox spokesman Joe Camero laid the blame on one or more radio stations conducting an emergency test. Cable systems pick up such alerts, and viewers should have seen a normal emergency-broadcast test. But in this instance a tone that normally would have signaled the end of the test was not transmitted. Because of the missing tone, the broadcast picked up a portion of audio feed that “bled into the alert,” the paper said.

Also Read: What Is the Doomsday Clock and Are We All Really About to Die?

“With these tests, an emergency tone is sent out to initiate the test,” Camero said. “After the tone is transmitted, another tone is sent to end the message. It appears that the radio station (or stations) did not transmit the end tone to complete the test.”

“We don’t want to alarm anyone with any false emergency alerts,” he added.

Both Cox and Spectrum are investigating the incidents.