The report provides an overview of Program 3.0’s first fiscal year by looking at approved projects including big-budget films and relocating TV series as well as production activity and access to career training and jobs.

The report also tracks COVID compliance expenditures. During the pandemic, projects have been able to include COVID-related expenses as qualified expenditures in their tax credit applications. Data shows that feature films in the program with budgets greater than $20 million typically plan to spend 5% to 6.5% of their total budget on COVID protocols. Lower budget films and TV series approximately 4.25% of their total budget.

“Amid all the disruption and uncertainty caused by the pandemic, today’s report affirms that California’s Film & TV Tax Credit Program has continued to work as intended to create jobs and opportunity across our state,” California Film Commission Executive Director Colleen Bell said in statement. “It is also helping train individuals from underrepresented communities and provide them with better access to careers in entertainment production. Initiatives such as our Career Pathways Training Program are helping ensure the next generation of production workers reflects our State’s diversity.”

As detailed in the statement, other hIghlights of the report include:

In-State Employment and Spending: For its first fiscal year, Program 3.0 welcomed a total of 48 film and TV projects that are on track to generate an estimated $2.6 billion in direct in-state spending, including more than $992 million in qualified expenditures (defined as wages to below-the-line workers and payments to in-state vendors). Non-qualified expenditures of $860 million do not qualify for incentives under California’s uniquely targeted tax credit program. The above figures are the result of a total of $335 million in tax credit allocation.  The 48 approved projects will employ a combined 8,000 crew, 5,000 cast and 91,600 background actors/stand-ins (the latter measured in “man-days”) over 2,700 filming days in California. They will also generate post-production jobs and revenue for VFX artists, sound editors, sound mixers, musicians and other workers/vendors.

Big-Budget Films: During its first fiscal year, Program 3.0 welcomed seven films with budgets greater than $60 million, which are on track to bring an estimated $683 million in direct in-state spending. This figure includes $276 in below-the-line wages and $176 million in payments to in-state vendors. Projects include “Bullet Train,” “Gray Man,” “Here Comes the Flood,” and “Me Time.”

TV Series that Relocate from Other States/Nations: During its first fiscal year, Program 3.0 welcomed five relocating TV series, making a total of 27 TV series that have relocated to California under different iterations of the state’s tax credit program. The latest five series are on track to bring an estimated $282 million in direct spending, including $104 million in below-the-line wages and $70 million in payments to in-state vendors. The five latest series are “Chad,” “Hunters,” “In Treatment,” “Miracle Workers” and “The Flight Attendant.” 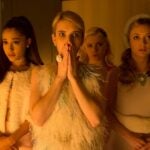 Big-Budget Films: During its first fiscal year, Program 3.0 welcomed seven films with budgets greater than $60 million, which are on track to bring an estimated $683 million in direct in-state spending. This figure includes $276 in below-the-line wages and $176 million in payments to in-state vendors. Projects include “Bullet Train,” “Gray Man,” “Here Comes the Flood,” and “Me Time.”

Workforce Training, Diversity and Inclusion: Program 3.0 includes several new and ongoing initiatives to promote workforce training, diversity and inclusion. The Career Readiness requirement (continued from Program 2.0) mandates that all tax credit projects participate in learning and training programs for students based in California. Working in collaboration with the California Department of Education and the California Community Colleges Chancellor’s office, tax credit projects have fulfilled the requirement by hiring student for paid internships, welcoming faculty members for externships, hosting workshops/panels and staging professional skills tours. New for Program 3.0 is the Career Pathways Program that targets individuals from underserved communities. It is funded directly by tax credit projects and works with partner training programs across the state. Despite challenges of recruitment and logistics due to COVID-19, the Career Pathways Program served 55 participants during its first year. Also new for Program 3.0 is the requirement that all approved tax credit projects submit a Diversity Initiative Statement outlining their programs to increase representation of women and minorities.

The full 45-page Progress Report is available on the CFC website.