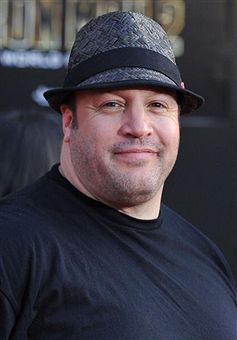 • Kevin James will star in and produce the action comedy "Here Comes the Boom" for Sony’s Columbia Pictures, reports Variety.

James’ "Grown Ups" co-star Salma Hayek is reportedly circling the film’s female lead, but no casting deals are done yet.

The logline is currently being kept under wraps, but James wrote the script with his "Zookeeper" screenwriter Rock Reuben, who also wrote and exec produced episodes of James’ CBS sitcom "The King of Queens."

Adam Sandler, who co-starred with James in "I Now Pronounce You Chuck & Larry," will unfortunately only produce the film through his production company Happy Madison, while James will produce through his Hey Eddie banner.

Broken Road’s Todd Garner will also produce, with Jeff Sussman serving as executive producer on the project, which could start shooting as early as January.

"The Zookeeper," which was originally set up at MGM before the studio was put up for sale again and is now a co-production between MGM and Sony, recently moved from October to July 8, 2011 after strong test screening results.

Garner has "Knight and Day" and "The Sorceror’s Apprentice" coming out this summer, and he’s also producing Sony’s Sandler comedy "Jack and Jill," which finds the funnyman playing a pair of brother-sister twins.

Besides "King of Queens," James previously worked with Sony on "50 First Dates" and "Hitch." He next stars opposite Vince Vaughn and Winona Ryder in Ron Howard‘s infidelity comedy tentatively titled "Cheaters." I think James is extraordinarily talented and completely deserving of his success.

• If you were holding your breath for a sequel to "Anchorman," well, you can exhale now. "Anchorman" director Adam McKay tweeted today that "Anchorman 2" is effectively dead.

McKay (@ghostpanther) wrote: "So bummed. Paramount basically passed on Anchorman 2. Even after we cut our budget down. We tried." Three hours later, McKay wrote: "To all who asked: no we can’t do Anchorman 2 at another studio. Paramount owns it."

Let’s get real here — "Anchorman 2" was never going to happen. Want to know the real reason why, besides the hefty star salaries? Because it doesn’t play overseas. Of the film’s $90 million worldwide cume, $85 million came from the domestic box office. Of course, "Anchorman" was a hit on DVD, but all the actors have since moved on to successful movie careers, so even if they agreed to take a significant pay cut, I’m not sure a sequel made financial sense for Paramount. 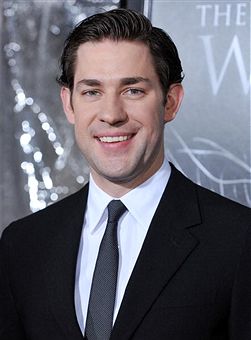 • John Krasinski and Drew Barrymore will star in Universal’s "Whales," a family-friendly fact-based drama about the 1988 rescue of a trio of California gray whales that got trapped under the ice of the Arctic Circle, reports Deadline.

Ken Kwapis will direct the heartwarming tale, which finds Krasinski playing a small town newspaper reporter who breaks the story and Barrymore playing a Greenpeace activist.

Together, they turn the potential tragedy into an international story that managed to bring together President Ronald Regan and Soviet leader Mikhail Gorbachev in the middle of the Cold War. Spoiler alert: They interceded to save the whales!

Call me crazy, but this is exactly the type of role/movie that Krasinski is perfect for. He never made any sense as Captain America, and there’s nothing wrong with that. But "Whales" fits right in his wheelhouse, and Barrymore could make an interesting potential love interest for the younger actor.

• Quick, somebody call the Governator!

Story follows an elite special forces operative whose daughter is kidnapped and slated to die unless he kills the rival of an evil exiled dictator. The original found Schwarzenegger killing everyone involved in the kidnap plot, but this time around, Ayer (a former Navy soldier who wrote "Training Day" and directed the dark cop dramas "Harsh Times" and "Street Kings") will put his own real-world spin on the premise by making the protagonist less brawny, but more skilled in covert tactics and weaponry. So basically … it’s the first season of 24?

Fox is also behind Nimrod Antal‘s "Predators," a reboot of Schwarzenegger’s 1987 classic "Predator," which the studio will release on July 9.

The original starred Caine as a cat burglar who tries to rob a billionaire of his priceless statue, and enlists the help of a waitress who is a dead ringer for the victim’s late wife. His relationship with his pretty accomplice complicates the execution of his master plan.

Joel and Ethan Coen have written the script, and Mike Lobell will produce the project after laboring for years to get it made.

TheWrap previously reported that Liman was interested in directing a new version of "The Three Musketeers," and Deadline also claims that he’s circling Paramount’s untitled moon mission project that has Jake Gyllenhaal attached.

Liman’s political thriller "Fair Game," starring Naomi Watts as CIA operative Valerie Plame and Sean Penn as her op-ed writing husband, will be the only U.S. film premiering in competition at Cannes next month. Summit Entertainment has acquired North American distribution rights to the film, which bodes well for its awards prospects now that Summit has proven it can mount a successful Oscar campaign with Best Picture winner "The Hurt Locker."