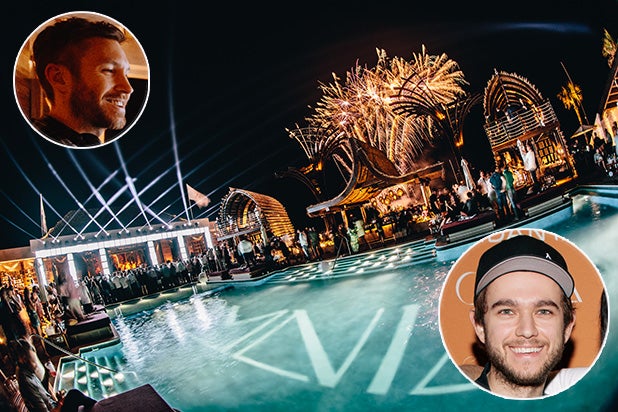 When international man of cake-tossing and crowd surfing, Steve Aoki, popped up from inside his traveling entourage’s huddle to become the first DJ to appear on the decks at Omnia Dayclub in Cabo San Lucas, Mexico, he greeted an invited crowd of 600 VIP’s with a bilingual salute: “I’m Esteban Aoki!”

While nothing was lost in translation from the “Just Hold On” producer, the opening weekend festivities (Feb. 23-24) were a transformation for Hakkasan Group.

The titan of Vegas daylife and nightlife familiar to Los Angeles billboard observers (Omnia, Jewel, the titular Hakkasan) did not export their party model to Mexico as a verbatim copy of its Nevada temples of EDM. 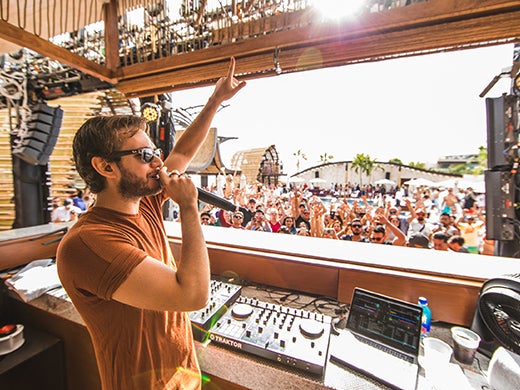 Zedd playing the first daytime set ever at the new Omnia Dayclub on Saturday, Feb 24. He blew through his allotted time to go longer. (Joe Janet)

Unlike Vegas’ festival style arena, Omnia Dayclub at the Vidanta Los Cabos is a beachside complex of two-story cabanas, private plunge pools, a bonfire on the sand stretching as wide as a UFC octagon, and scaled back production aimed at entertaining during daylight hours.

Think “Burning Man on Baja” or “Mykonos via Mexico.” 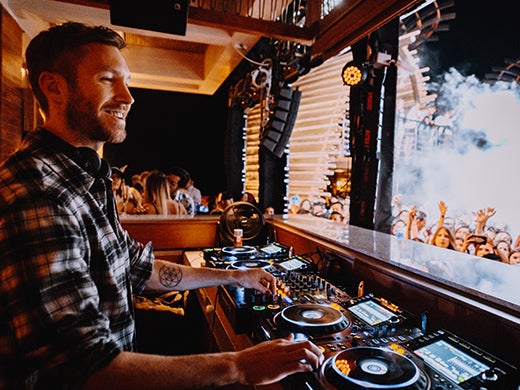 A food menu as large as the vodka bottle menu sets the tone. If Zedd, Calvin Harris and Aoki were not rocking the pool — and though they were on opening weekend, they won’t on a regular basis — you can squint and imagine that you could read-a-book or dip into siesta mode here.

The project came about via a hospitality and development partnership with Grupo Vidanta, a developer that holds the pole position in luxury tourism across Mexico and Central America. 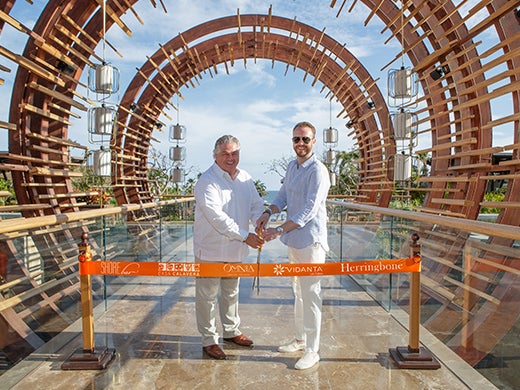 While operators told The Party Report that this is not intended to be a 3 a.m. alternative to wild nights in Vegas, nobody told Calvin Harris. The super producer arrived for a Saturday night set and played for nearly four hours. (For reference, the default contractual unit of “DJ headliner sets” is half that.)  When fireworks erupted over the beach, (top photo), Harris dialed up Katy Perry’s “Firework” and continued to spin into the early morning.

“Is he mad at somebody?” one of his lighting crew guys later asked rhetorically. We doubt it.

Calvin’s always been a crowd pleaser. When he plays “This Is What You Came For,” he knows what a private event crowd toasting the opening of a luxury venue on the beach in Mexico came for.

Beyond Calvin fans and media, invites must have said: “Send us your most beautiful, most Instagrammable and most connected.” That’s who else showed up for a first look. 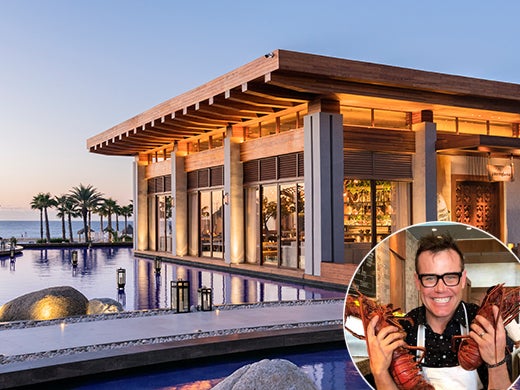 Mano a Mano: Chefs Brian Malarkey (inset) and Alex Branch were running food and waiting on tables themselves.

Fresh off an appearance on “Beat Bobby Flay” that aired days earlier, celeb chef Brian Malarkey (above, right) was also on scene to open a Herringbone on the property. On the first night of service, it was so packed with Vegas cocktail models that The Party Report couldn’t see the walls. We have no idea who was tending to customers back in Las Vegas. 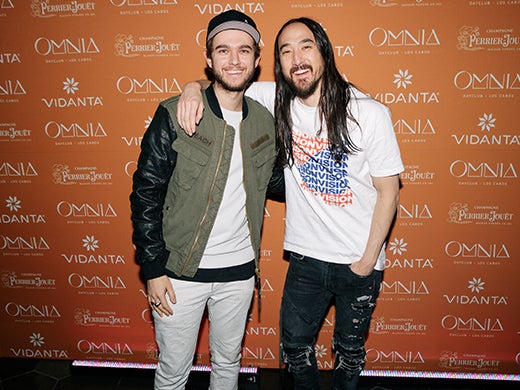 Malarkey was personally slinging bluefin tuna poke and grilled seafood tostadas, “touching” (greeting) every table. How often will the San Diego-based Malarkey be in Cabo? “As often as they’ll let me,” he told The Party Report. 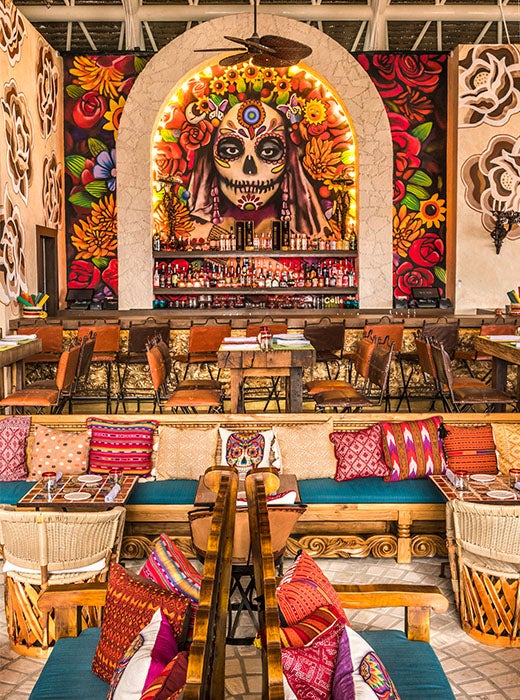 Omnia and Herringbone join a new SHOREBar and Casa Calavera as a four-venue entertainment district. It’s located at Vidanta Los Cabos, a resort about 30 minutes away from the downtown Cabo party scene in the more refined San Jose del Cabo.

John Terzian and Brian Toll (the h.wood Group guys behind Poppy, The Nice Guy and Delilah) came down to open the new SHOREbar, a cousin of L.A.’s sleek cocktail haunt on the beach. This one floats in a pool and has high end rec room games (ping pong, foosball) to go with a permanent taco truck churning out quesadillas and guacamole at all hours of the day.  Continuing their partnership with Hakkasan group, they smartly positioned SHOREBar as a launch pad on the path in to Omnia and as the place to regroup for more cocktails on the way out.  Casa Calavera, a dia-de-los-muertos Mexican restaurant and lounge rounds out the district. It serves as both a backstage area for the DJ’s at Omnia, an entry point to the beach, and the site of many future boozy brunches.

Also Read: Surprise: Mexico-Based 'Coco' Is More Popular in China Than the U.S.

With muscular opening ceremonies now in the past, the venues will settle in to less bombastic year-round operations. In L.A., it’s nearly impossible to sustain the buzz of an industry launch. Tourist markets are different. When Club LIV first opened in Miami, it was a relatively far taxi ride from the heart of South Beach’s nightlife. In Mykonos and other luxury beachclub destinations in Europe, everything is a trek yet the right clientele still gets there and crowds it full.  In the current “daylife era,” many party people go out only during the day, not at night.

For that sector of Hakkasan’s brand, this is what they’ll come for.

From Andy Warhol and Basquiat to Justin Bieber and Leo DiCaprio, Mr. Chow has survived pop culture revolutions and become a staple hang for power players in entertainment, media and beyond. Here's who turned up to toast the restaurant's 50th year.