"Southland" airs its TNT season finale tonight — and the lackluster ratings for the show’s cable run make it anything but a slam-dunk for renewal.

That doesn’t mean the John Wells-produced series, picked up after NBC pulled the plug on it last fall, is dead. But TNT executives have a tough decision ahead of them. 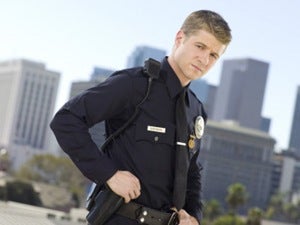 Since original episodes began airing March 2, "Southland" has averaged roughly 2.1 million viewers in its 10 p.m. timeslot, with about 1 million between the ages of 18 and 49, Nielsen says. The good news: That’s more than double the slightly less than 1 million viewers TNT averaged in the same timeslot last year with its short-lived drama "Trust Me."

What’s more, "Southland" is getting a big bump from DVR viewing. It gets a nearly 50 percent increase in overall viewership when 7 days of DVR data is included in the average. Among adults 18-49, the increase is an even more sizable 60 percent.

Not so hot, however, is how "Southland" stacks up to some other TNT dramas — including shows that have gotten the axe.

The network’s "Raising the Bar," for example, averaged 3.8 million viewers in its second season — only to be killed before season three. Of course, "Bar" had the advantage of airing in the summer and opposite less intense competition, as well as the benefit of a monster lead-in from TNT’s top-rated series, "The Closer."

But newcomer "HawthoRNe" managed to average 3.9 million viewers in its freshman run, and it aired at 9 p.m. without a boost from a supersized lead-in.

And this winter — in a more apt comparison — TNT’s first-year drama "Men of a Certain Age" managed to pull in an average audience of 4.2 million viewers while returning hit "Leverage" scored 4.5 million viewers on average.

A potentially telling sign that TNT knows the numbers for "Southland" aren’t great: The network didn’t even mention the show in its long list of first-quarter ratings highlights it issued late last month.

"Southland" has also seen its numbers decline since original episodes bowed. The initial first-run hour averaged 1.29 million viewers 18-49 on March 2, but was down to 964,000 by last week’s penultimate episode.

The so-so numbers for "Southland" likely explain why, as a spokesman told TheWrap, TNT hasn’t yet decided on a renewal for the show.

Working in the show’s favor: The DVR data, a passionate core audience that’s proven to be highly engaged with the show, and the fact that "Southland" has gotten very positive critical feedback. While TNT doesn’t value positive buzz as strongly as HBO or Showtime, having a prestige show isn’t a bad thing — particularly when you’re a network like TNT, which mostly programs meat-and-potatoes fare.

Industry insiders expect TNT to make a decision on a new season of "Southland" shortly, in time to allow actors the ability to compete for any recasting-sparked re-castings this summer.

What is clear already: NBC probably made the right call shutting down production on "Southland." The show’s inability to come close to matching its network audience, as well as the lack of week-to-week growth on TNT, indicates the network didn’t dispose of a budding hit.

Likewise, TNT didn’t make a big blunder trying out "Southland." The fact is, the network got the show at a bargain rate — NBC made a low price tag possible — and the show did improve ratings in its timeslot. What’s more, it never hurts to do a solid for a producer such as Wells.

Whether TNT has the desire to keep trying to build an audience for "Southland," however, remains to be seen. But if the network does decide not to move forward, it won’t be a surprise.