The movie was released by Sony, without much pre-release talk about Academy Awards. It opened to extremely positive reviews, and to strong box office figures.

And when it had its official Academy member screening at the Samuel Goldwyn Theater, it drew a big crowd and got what one eyewitness described as “the most applause of any movie in a couple of years.”

And no, it’s not “This Is It,” which fits all of those descriptions as well. But a couple of months before Michael Jackson wowed ‘em at the Academy, “District 9” did the same. Peter Bart, the Variety editorial director who also happens to be an Academy member and reported on the “D9” screening in his blog, walked out of the Goldwyn and dubbed director Neill Blomkamp’s original, imaginative take on the genre “an absolutely brilliant movie that could easily sneak away with some Oscars.” 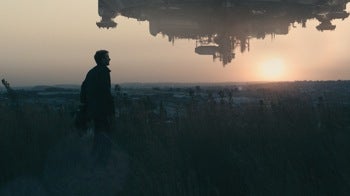 The Peter Jackson-produced film, about aliens who are herded into dismal South African camps when their spaceship loses power above Johannesburg, was easily one of the freshest and most original films of the summer. It’s a Best Picture long shot, to be sure – but when the Academy talks about expanding the category to include more diverse, audience-friendly films, this is the kind of movie they might as well be talking about. And even if it doesn’t get into the Best Pic race, it should be a player in other categories, including makeup and special effects.

Besides that, the Telegraph just put it at No. 45 on its list of the 100 defining films of the decade, one of only three 2009 films to make the list. (“The Hurt Locker” and “Up” are the other two.)

The bottom line is this: if you haven’t seen it, you should. TheWrap is showing it tonight at the Arclight Sherman Oaks; writer-director Blomkamp and co-writer Terri Thatchell will be there to talk with editor-in-chief Sharon Waxman and take emailed questions from the audience afterwards.

You can RSVP here.