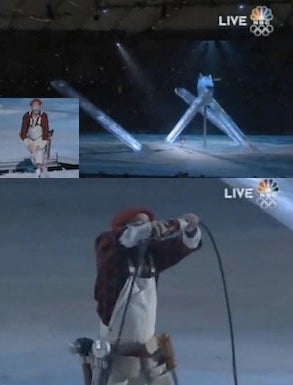 How do you recover from the national embarrassment of not being able to get the Olympic torch up?

Send in the clown.

Canada closed the Vancouver Games on Sunday night by showing its famous self-deprecating side: In a nod to the torch malfunction that marred the Opening Ceremony, the closing gala began with an arm missing from the four-armed beacon.

And then, a clown decked out in Candadian colors emerged from the missing arm’s open trench, spliced some power lines together with a flourish, and the final piece rose into place.

The rest of the show continued in that lighthearted vein, poking fun at Canadians’ tendency to apologize for everything — especially conspicuous success.

"I lived in the U.S. for 30 years," said Canadian favorite son Michael J. Fox, who along with William Shatner and Catherine O’Hara took spirited swipes at their native Great White North. "But if the U.S. is playing Canada in hockey, I’m sorry — I’m wearing a maple leaf on my sweater."

That gave way to such absurdities as a flamboyant song-and-dance number featuring dozens of mounties, tabletop hockey players and dancing maple leaves.

And, if you can believe it, things got more ridiculous from there.

But hey, they have health care.