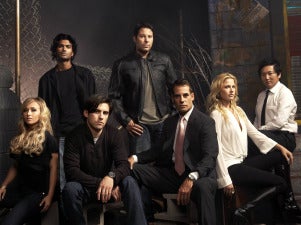 No surprises here, but if reports are to be believed,  several low-rated shows, including "Better Off Ted," "FlashForward," and "Heroes" have been given the boot.

NBC apparently has canceled the ratings challenged "Heroes" after four seasons. Although other sites such as Variety and the Hollywood Reporter are saying the cancellation is official, the network is refusing to issue an official announcement.

Cast member Greg Grunberg, however, tweeted that the show was over.

However, he seemed to leave the door open for a special TV event that would tie up some of the show’s loose ends.

The superhero drama had been struggling against competition from CBS’ hit comedies "The Big Bang Theory" and "Two and a Half Men," and only managed to draw a dismal 4.4 million viewers in its season finale last February — a far cry from the 14.5 million viewers it routinely pulled in during its inaugural season in 2006.

Two of the peacock network’s medical dramas — "Trauma" and "Mercy" — also have been euthanized, according to the Hollywood Reporter. Both shows averaged less than 2 million viewers this year. Again, no official comment from NBC.

ABC also joined in the bloodletting. The network pulled the plug on the critically acclaimed sitcom "Better Off Ted" and the DVR favorite "Flash Forward." "Ted" endured a shortened season, while "Flash Forward" drew a mere 4.8 million viewers this week, a far cry from the more than 12 million viewers who tuned in for its premiere.

Likewise, it was curtains for Alyssa Milano’s comedy "Romantically Challenged" and the NBC transplant "Scrubs." "Scrubs" logged its ninth season this year and tried to reinvigorate the show by moving the setting The finale drew 3.4 million viewers. "Romantically Challenged" had a much less distinguished run, officially closing its network career after a mere four episodes.

ABC would not officially confirm any of the cancellations.

In anticipation of unveiling their full slates next week, the various broadcast networks were busy cleaning house Friday. The biggest stir was made after NBC announced that its staple "Law & Order" would close shop after 20 years. However, the network’s decision to grant a reprieve to chronic under-performer "Chuck" was equally surprising.