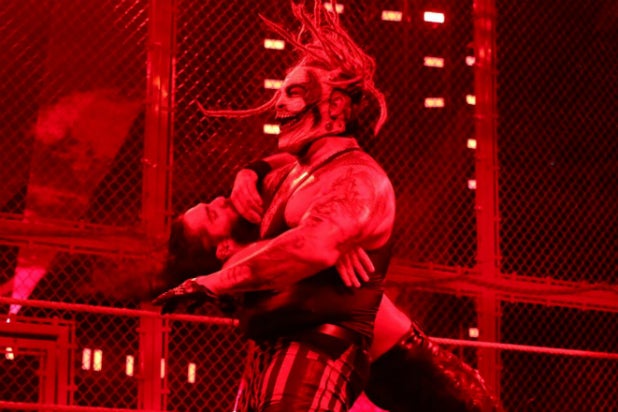 "The Fiend" Bray Wyatt vs. Seth Rollins at WWE's "Hell in a Cell"

Hell hath no fury like a wrestling fan scorned, it turns out.

The hashtag #CancelWWENetwork trended on Twitter Monday morning, as WWE fans were still fuming a day after the “Hell in a Cell” main event  — a title bout between Universal Champion Seth Rollins and “The Fiend”  Bray Wyatt — ended in a controversial and confusing manner.

Here’s what happened, if you missed it: “Raw” champ Rollins hit The Fiend with everything in his repertoire, including no fewer than 10 Curb Stomps and a Pedigree, plus all kinds of weapons. Still, the debuting Wyatt character kicked out of pin attempts easily, early and repetitively. The idea there was to demonstrate The Fiend’s indestructible nature, but what it really did was bury (wrestling parlance for “to totally devalue”) the WWE Universal Champion and his otherwise-devastating finishing maneuvers.

The referee ended Sunday’s pay-per-view main event after Rollins slammed a sledgehammer on top of a ladder that he had previously dropped on Wyatt’s face (and the ladder followed an unprotected headshot with a chair). Given the no-disqualifications nature of a Hell in a Cell match, a DQ wouldn’t make any sense there and a TKO was not announced, which whipped knowledgeable fans into a fury. There was no clear reason as to why the match was stopped, and WWE.com is currently just calling it a “match stoppage.”

After the match ended, there was a chorus of boos and chants of “A-E-W!” and “Restart match!” When the cameras went off and it became clear to fans in attendance that the PPV was completely over, the audience chanted for refunds, which fans in attendance captured via cell-phone video and posted to Twitter.

By Monday morning, the #HIAC trending topic had been replaced in Twitter’s Top 10 by #cancelWWEnetwork.

WWE did not immediately respond to TheWrap’s request for comment on this story — and on any immediate decline (or lack thereof) in subscriber numbers.

Golden 1 Center where Mad as shit

After the lights on after that Trash end at #HIAC

Even former WWE Superstar Ryback is pushing the protest:

WWE legend X-Pac also wasn’t thrilled with the finale — ripping the decision on WWE’s own “Watch Along” show.

X-PAC’s reaction to the ending of #HIAC is all of us lmaoooo pic.twitter.com/dgCbQt5I9g

Here’s a quick look at some of the upset fans sharing #cancelwwenetwork — including several that posted a screenshot of them actually canceling their membership.

was already considering doing this, but tonight's PPV made the decision a whole lot easier #cancelwwenetwork pic.twitter.com/bzWWioWglN

The hashtag isn't enough. Post your receipts. When any scripted entertainment stops making sense, or consistently insults our intelligence, and there's no hint of it ever getting better, you just stop watching #cancelwwenetwork pic.twitter.com/X8A3DcUDsV

People are tired of investing in these characters and wwe books them to shit..

Kofi Losing in less than 5 seconds

The Fiend getting a DQ…In a Cell match ???? LOL

I just love the people who think they are so clever to come here just to say "y'all know wrestling is fake right?" OMG you're so funny! Never heard that one before! ????????????
You know what else? It's a tv show and we have the right to get pissed when it sucks. #cancelwwenetwork pic.twitter.com/gNFcKysALY

WWE Network launched in February 2014 as the go-to streaming app for wrestling fanatics. For $9.99 per month, fans get access to all WWE pay-per-view events and the ability to rewatch Raw and Smackdown matches, among other perks. WWE Network had 1.69 million subscribers at the end of the second quarter, the company reported in July.

The uproar over Hell in a Cell comes only a few days after WWE’s “Friday Night Smackdown” had a huge debut on Fox, pulling in nearly 4 million viewers. The uproar, so far, hasn’t impacted the company’s stock, with WWE Network’s stock climbing 1.5% to $71.34 per share in early trading on Monday.