Hosting “The View” isn’t a job for everyone — and that includes “Fuller House” star Candace Cameron Bure. According to the actress, her two-year stint on the daytime talk show left her with PTSD.

In an interview on the show’s new podcast, “The View: Behind the Table,” Bure said the stress and anxiety she feels when talking about the show still leaves a “pit in [her] stomach.” Bure was quite literally behind “The View’s” table for two seasons, from 2015-16.

“There was only one type of stress that I’ve ever felt in my life that came from that show and I [have] PTSD, like, I can feel it,” Bure said. “It was so difficult, and to manage that emotional stress was very, very hard.”

According to the “Full House” alum, most of that emotional stress stemmed from the fact that she served as the conservative viewpoint on the show, and with that came its own form of pressure. Bure added that many times, the hot topics weren’t all that easy to get into on a deeper level. 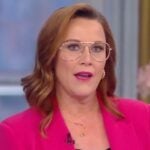 “[I was] just trying to understand and have a general grasp of topics that I didn’t want to talk about or didn’t care about,” Bure said.

With that hesitation also came physical symptoms, Bure added. Not only did she cry before shows, but she also often felt nauseous.

“When I felt like I was going into a show that I didn’t have a clear opinion about or it was something that I was legitimately nervous to talk about because I did have an opinion about it but I knew I was the only one at the table that had my opinion, I would just get sick to my stomach,” she said. “I hated that feeling. And then I’m like, ‘I don’t know who’s going to come at me.’”

All that said, Bure has no regrets about staying on “The View” for as long as she did.

“I don’t know that I regret anything, honestly,” Bure admiited. “I feel like there were so many wonderful takeaways from the show. And as difficult as that job was, I’m very, very grateful for it.”