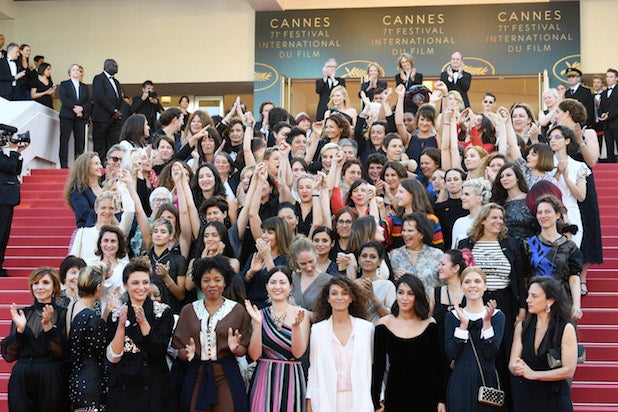 If you’re looking to sum up the 2018 Cannes Film Festival so far, you might want to turn to an instructive scene near the end of Eva Husson’s competition entry “Girls of the Sun.” In the scene, Mathilde, a war correspondent played by Emmanuelle Bercot, is speaking to Bahar, a female squad leader played by Golshifteh Farahani.

“Be warned,” Mathilde says of the story she’s going home to write about Bahar’s exploits on the battlefield. “You’re going to be a heroine.”

Is this the “we’re all heroines” edition of the Cannes Film Festival? Well, consider this:

The lack of women is often news at Cannes, but this year their absence and their presence is the biggest story of the first six days of the festival. The currents that hit Hollywood in the wake of the Harvey Weinstein revelations and led to Frances McDormand’s impassioned Oscar-night speech have definitely washed up onto the Croisette, and this year’s Cannes, the first in memory without Weinstein’s oversized presence, is at least slightly more inclusive than usual.

We won’t know for at least a year how effective this year’s campaign has been; Fremaux has repeatedly said that he’s in favor of affirmative-action-style provisions to increase the number of women behind the scenes at Cannes, but he’s steadfastly insisted that gender should never be a factor in programming decisions.

And we won’t know if this is the year that only the second woman ever takes home the festival’s top prize, the Palme d’Or. On the heels of Saturday’s “Girls of the Sun” screenings, some observers went so far as to brand Husson the odds-on favorite to follow Jane Campion (“The Piano”) as the only women to win — but that’s certainly a premature statement with 12 of the 21 main-competition films yet to screen as of midday Sunday.

Also in the wings are the two American directors in competition: Spike Lee with “BlacKkKlansman” and David Robert Mitchell with “Under the Silver Lake.”

That’s a lot left to see – and in addition, it’s entirely possible that “Girls of the Sun,” for all its effectiveness as a piece of cinema, might be too slick and even manipulative for the Cannes jury, however much they might want to honor a female director.

(I’d say it probably has a better chance of winning the Oscar for Best Foreign Language Film than the Palme d’Or.)

So by the end of the festival, Cannes 2018 could belong to a different film – maybe a film from a different woman, more likely one from a male director.

Of the competition films that have screened since the festival opened on Tuesday with Asghar Farhadi’s “Everybody Knows,” the one to receive the most acclaim is probably “Ida” director Pawel Pawlikowski’s austere love story “Cold War,” though Kirill Serebrennikov’s Russian punk(ish) musical “Leto,” Jafar Panahi’s modestly subversive “Three Faces,” Christophe Honore’s AIDS saga “Sorry Angel” and Jean-Luc Godard’s assaultive “The Image Book” all have strong partisans.

So far, though, the biggest discoveries of Cannes ’18 have been in the margins, with films like Lukas Dhont’s affecting transgender teen drama “Girl,” while the biggest buzz has been around transgressive treats like Gaspar Noe’s predictably extreme “Climax” and Ali Abbasi’s troll-sex romp “Borders.”

Still, none of those have had anywhere near enough heat to steal the spotlight from those 82 women standing on the steps of Grand Theatre Lumiere on Saturday. For now, that’s the story of the 71st Cannes Film Festival: All the heroines.