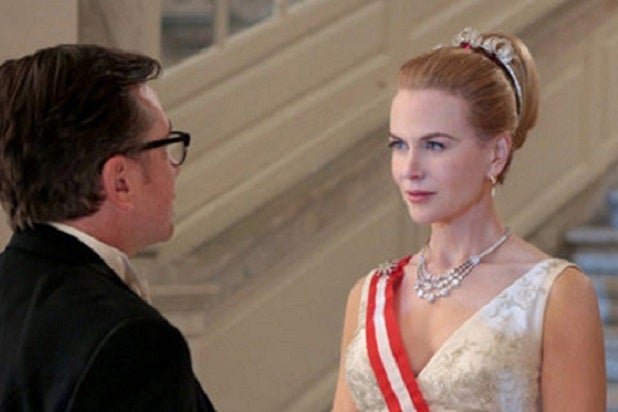 Harvey Weinstein missed the Cannes premiere of “Grace of Monaco” on Wednesday, and given the reviews of the film, he’s probably glad that he did.

The mega-producer, who was absent on Wednesday due to a long-scheduled trip to visit refugee camps in Syria, was rumored to want a breezier cut of Olivier Dahan‘s film, which features Nicole Kidman as Grace Kelly. Weinstein sought a picture that highlighted Kelly’s Hollywood life, while the filmmaker supposedly fought to keep in its darker elements about Kelly’s life as the Princess of Monaco. Whichever cut won out was greeted rudely by critics in France, who largely tore apart the movie.

Writing for The Guardian, Peter Bradshaw spares no fire in his attack on the movie, calling it, “so awe-inspiringly wooden that it is basically a fire-risk.” In the opening paragraph alone, he adds: “The cringe-factor is ionospherically high. A fleet of ambulances may have to be stationed outside the Palais to take tuxed audiences to hospital afterwards to have their toes uncurled under general anaesthetic.”

The Telegraph had similarly, if less venomous, disregard for the movie, which, like The Guardian, it also gave one star. “By the end of the first scene [critics] had started curling up, like startled armadillos, into tight little balls of embarrassment,” the paper wrote.

Only adding to the awkwardness is that Kelly’s family came out against the movie last weekend, albeit only based on reading the script and watching trailers. Kidman on Wednesday responded to the rejection with disappointment.

“I mean, obviously, I feel sad, because I think the film has no malice toward the family, particularly toward Grace or [Prince] Rainier,” she said during a press conference. “It’s fictionalization. You take dramatic license… I still have respect, and I want them to know the performance was done with love”

Word is that Weinstein is close to a deal to distribute the film after all, and, as noted, his absence has nothing to do with the catastrophic opening. In a statement released early Wednesday, he explained that he could not be on the glitzy Croisette because he was doing humanitarian work.

“My wife Georgina and I have been in Jordan visiting two Syrian refugee camps, Al Zaatri yesterday and Azraq today,” Weinstein said. “This was a long planned trip with the UNHCR and our friend Neil Gaimon to bring attention to the plight of refugees who have been forced to flee Syria and the incredible work of UNHCR. I’m wishing Olivier, Nicole, Pierre Ange and Uday and the Grace of Monaco team all the best for the screening in Cannes tonight.”