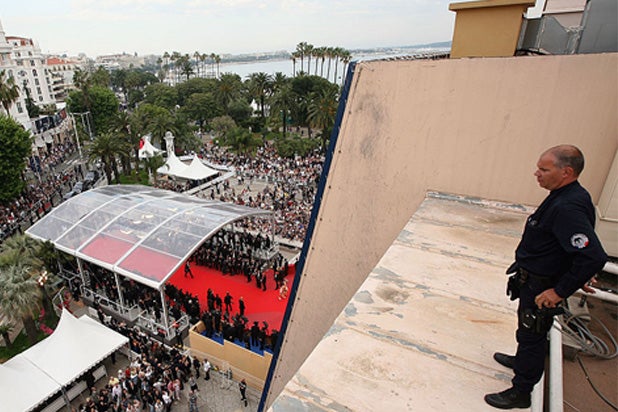 With just two days before the Cannes Film Festival kicks off, French authorities are taking no risks.

France’s Minster of the Interior Bernard Cazeneuve toured the festival headquarters and met with local officials on Monday, stressing the extensive measures put in place to keep festivalgoers safe.

“The resources mobilized are exceptional,” said Cazeneuve. “Several hundred police officers will be active each day, with over 12 motor squads, [alongside active] bomb squads and lifeguards.

“There will also be 400 private security agents securing all points of access.”

Also Read: Sony Pulls Out of Aaron Sorkin's 'Molly's Game,' Film to Be Shopped at Cannes

While the government made clear that the 2016 festival has seen no credible threat, memories of the November 2015 attacks in Paris and the expected attendance of over 200,000 people have put authorities on edge.

In April, law-enforcement officials staged an elaborate attack simulation that saw four armed “militants” storming the famous red steps of the Palais. Over 200 officers participated in the exercise meant to promote confidence and preparation, but the press dissemination of images of the event proved unsettling to many.

Other efforts may have similar unintended effects, including Cannes mayor David Lisnard’s plan to promote festival safety via random bodily searches in all neighborhoods of the city — a plan, that if not handled delicately, that could well spark rather than subdue local tensions.

Still, festival organizers have promised attendees an “impenetrable bubble” around the red carpet, and they have hired a small army of seasoned security professionals to see to that.

They have also sought the advice of four internationally renowned counterterrorism experts, including retired Brigadier-General Nitzan Nuriel, a 40-year veteran of the Israel Defense Forces and former U.S. Armed Forces liaison. After studying recent attacks from around the globe, Nuriel recommended paying particular attention to the waterway.

Local officials heeded the advice. “No single boat will enter the Cannes bay without being checked,” the city’s chief of police told Le Monde.

Meanwhile, security concerns have made their way into festival programming as well. In April, Directors Fortnight head Edouard Waintrop revealed that the new security measures will cause his sidebar to lose 17 hours of projection time, effectively preventing the festival from screening four additional films.

And some reports suggest that festival bigwigs flatly rejected local auteur Betrand Bonello’s latest film, “Paris Is Happening,” because the timely plot concerns a group of disaffected youth planning an attack on the City of Lights.

Though Bonello premiered his two previous films, “House of Tolerance” and “Saint Laurent” in competition and is seen as a leading light in contemporary French cinema, “Paris Is Happening” will not be happening in Cannes.