The Cannes Film Festival is burning hot as the finish line comes into focus, saving up plenty of heated debate, outrage and star power with only few days left to dazzle.

Audiences walked out of Lars von Trier’s “vomitive,” “torturous” serial killer movie “The House That Jack Built.” And following the premiere screening of his latest “BlacKkKlansman,” director Spike Lee expanded on the urgent and angry politics of the true story of a black detective who infiltrates the KKK — hitting out at Trump and talking up his producer Jordan Peele in the process.

Kristen Stewart followed up this week’s historic demonstration of female power with a cheeky red carpet rebellion — and Chewbacca got a fresh blowout for his strut down the Croisette.

Also Read: 'The House That Jack Built' Film Review: The Real Shocker Is How Dull Lars von Trier's Film Is

Lars von Trier’s latest film, “The House That Jack Built,” premiered — and many critics reported that audiences walked out in droves. One even said the director had “gone too far this time.”

Matt Dillon stars as a haphazard serial killer in the throes of an existential crisis. Uma Thurman and Riley Keough make Hitchcockian blonde cameos as von Trier seems to be commenting on his own body of work through Dillon’s character.

“People are walking out of the new Lars Von Trier movie,” tweeted another. “Like they didn’t know exactly what they were getting into.”

Barefoot on the Carpet

Cannes juror and Chanel ambassador Kristen Stewart sent a subtle message — or perhaps made a move to make herself comfortable — at Monday night’s “BlacKkKlansman” premiere when she slipped off her stiletto heels and scamped up the stairs of the Grand Palais in her bare feet.

The move is being interpreted as a small dig at a big scuffle over Cannes’ dress code, specifically that women were required to wear high heels to gala screenings.

The policy was widely criticized in 2015 after several women said they were turned away from a screening for wearing flats.

"If you’re not asking guys to wear heels and a dress, then you can’t ask me either." – Kristen Stewart, via @glamourmag #AskHerMore #Cannes2018 pic.twitter.com/OCnhzggoTk

Over the Shoulder, Chewy!

While Cannes is always a powerhouse of glamour and sophistication, it is unflinching in the massive platform it gives to studio films seeking free press. While that results in some tacky PR stunts, it also makes for occasional magic. 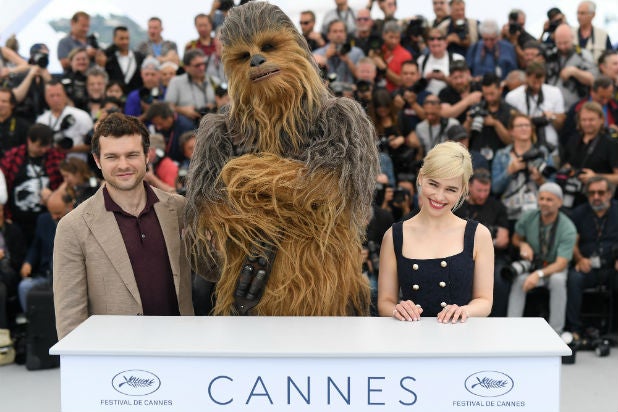 After a standing ovation, an initial rush of praise from the American faction in the audience and some skepticism from French journalists, Spike Lee spoke at length about his new film at a Tuesday press conference.

The filmmaker explained a decision to button “BlacKkKlansman” with documentary footage of the violent protest by neo-Nazis and white supremacists last summer in Charlottesville, Va., including scenes of the killing of counter-protester Heather Heyer.

“We have a guy in the White House — I’m not gonna say his f–ing name — who defined that moment not just for Americans but the world, and that motherf–er was given the chance to say we are about love, not hate,” Lee told press.

Lee also opened up to Vanity Fair about how the project came to him via Oscar winner and producer Jordan Peele.

“It doesn’t take a rocket scientist to discover why,” said the filmmaker.

“He wanted a bad motherfucker to direct this, the subject matter. I have to give a love shout-out to Jordan, because he was doing his thing, on top of the world. There was probably a list. There’s no guarantee he had to come to me. I want to thank him for that,” the director concluded.

Finished films keep finding homes with indie distributors out of the Marche du Film. Catch up on the latest sales: