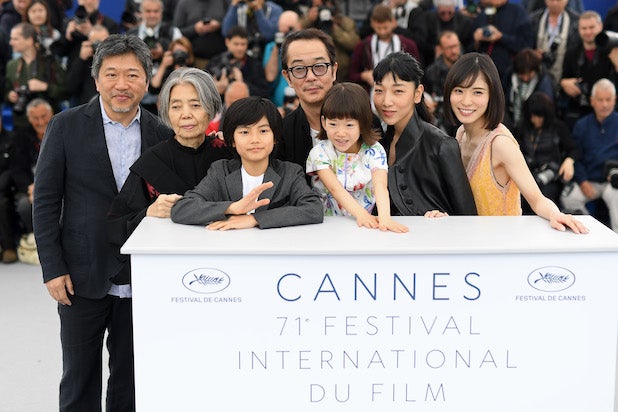 The Cannes Film Festival is making a U-turn from the days when high heels were required on the red carpet .

This year babies, children and their nannies will be given special accreditation by the festival free of charge at the festival, the first in a series of accommodations to working moms and dads – including breastfeeding stations – the festival announced on Tuesday.

Parents will have access to a kids’ pavilion and changing and feeding area in the Palais de Festival, and parents entering the Palais with children will be given priority access. Kids will even get their own VIP bag that includes a map of other services in Cannes, a list of certified nannies and more.

Cannes and the Marché du Film are making these moves in collaboration with a newly-formed collective called Parenting at Film Festivals.

The new initiative is called “Le Ballon Rouge,” named for the 1956 children’s film by Albert Lamorisse. As proposed by the Parenting at Film Festivals collective, the festival approved many of the collective’s ideas and will look to implement more in 2020 once the demand for these services is realized. The initiative was formed as a way to help parents in the film industry juggle the work-life balance.

“Although the ever-present issue of work-life balance affects everyone, regardless of gender, we know the impact on women is much greater. There is much work to be done by major festivals to make their infrastructure and services family-friendly, to more effectively enable participation of women in the industry, who will benefit from a better balance and thus more success. We are excited to lead the way among major festivals and hope other festivals will follow,” Festival de Cannes General Delegate Thierry Frémaux and Marché du Film Executive Director Jérôme Paillard said in a joint statement.

“We’re heartened and amazed that the Festival de Cannes and the Marché du Film have listened so intently to our concerns. They embraced the vast majority of our proposals and are seriously considering the rest for 2020 once the demands for these services have been evaluated. We believe this will pave the way for an unprecedented new children-friendly journey that other festivals can take inspiration from,” the core team from Parenting at Film Festivals said in a statement.

The budget for the Kids Pavilion childcare service was raised through a crowdfunding campaign, with more than 12 companies contributing their own financial support, those being Unifrance, Cinando, EAVE, Wolf Kino, The Film Agency, Pyramide, Madman Entertainment, ADEF, Europa International, Film Constellation, Charades. Further, Raising Films and 5050X2020 have provided support and advice to Parenting at Film Festivals to make this initiative a reality.

Here’s a list of the five key services offered in Le Ballon Rouge:
1.  Family-Friendly Accreditation Process: Film professionals traveling with babies and young children will have a special accreditation in order to access the dedicated services the Marché is providing, including the Pantiero’s Kids Pavilion and the Palais’ Change & Feeding Corner, as well as two additional badges for nanny + baby (free of charge). Cinando will host on its site the newly-created group Parenting at Film Festivals to better identify the community and its needs.

2. Le Ballon Rouge Kids Pavilion: located at the Village International Pantiero, this 25m2 tent with terrace will welcome families from 10 am-6 pm daily from the 14th until the 21st of May. There, parents can choose to either spend time with their children, have family-friendly meetings in dedicated areas, or leave their children for up to 6 hours in the care of professional nannies provided by a specialized company. This special service will be offered by a cluster of partners. A small compensation will be asked to parents wishing to benefit from this service.

3.  Le Ballon Rouge Express-Changing & Feeding Corner: a dedicated room for parents and carers for breastfeeding, feeding or nappy-changing, will be open from 9 am-6:30 pm daily from the 14th until the 25th of May in the Palais des Festivals.

4. Easy Access: priority access to the Marché will be given to parents entering with children at the Palais’ main entrance, Riviera entrance and Pantiero entrance. As the stroller approaches with its dedicated Ballon Rouge flag, staff will help them through security.

5. Le Ballon Rouge Baby VIP Kit: in collaboration with Parenting at Film Festivals and Cinando, a dedicated bag for children will be offered, with family-friendly map and services in Cannes, Marché access flag, list of certified nannies for after-hours care, and other helpful items.

The Marché du Film – Festival de Cannes will take place from Tuesday, May 14 to Thursday, May 23.