I’ve seen enough to know that I’ve seen too much.

David Landers said that in “A League of Their Own,” and the line definitely rang true for me last week, as Oscar season turned ugly and went well beyond the point of Too Much.

Between illegal emails, allegations of smear campaigns, ludicrous rationales for why people should vote for this or that, and a major media outlet running 11 different stories in four days attacking the frontrunner, hard campaigning moved into the realm of the truly offensive.

And all this invective and sniping obscures the fact that this awards season, while stretched too long by the Olympics, had been sort of a fun one. Yes, voters might be confused by this whole preferential-ballot thing, but it’s given an edge of uncertainty to a year in which many of the races long ago seemed like locks.

The expanded slate of 10 Best Picture nominees, meanwhile, kept more films in the game and, to my mind, yielded a solid slate of contenders that shows the AMPAS gamble is worth continuing. 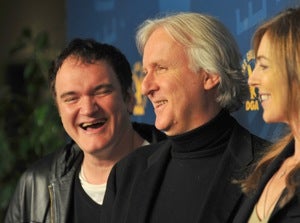 But instead of allowing us to honor the wildly divergent frontrunners and celebrate the inclusion of “Up” and “District 9” and “An Education” and “A Serious Man,” terrific films that would otherwise have been left out in the cold, the season turned into sniping and snarking and turning private emails into public controversies.

And I’ve been guilty of it, too. I’ve been too snide about some recent claims made by campaigners, and too ready to make fun of good movies for reasons that don’t have much to do with what’s onscreen.

Lines have been drawn, and the coverage shows it. You’ve got one blogger who would love nothing better than for his fall prediction of an “Inglourious Basterds” win to come true, and one who affects a pose of neutrality but obviously thinks an “Avatar” win would be healthier for Hollywood. And then you’ve got the unabashed “Hurt Locker” partisans, a group to which I’ve made it clear that I belong.

So with one day left until the polls close, and a week to go before the 82nd Academy Awards, I want to back away from the ugliness for a minute and say this: if “Avatar” or “Inglourious Basterds” or something else wins Best Picture, good for them.

I mean, I saw “Basterds” again over the weekend. It’s a wonderfully entertaining movie. Christoph Waltz is as good as everybody says. The two-and-a-half hours fly by. And I bow to a filmmaker with the audacity to posit an alternate ending to World War II, one in which the Jews (and the movies) bring down the Third Reich.

I still don’t think it’ll win – but if it does, it’ll be because it’s a damn good piece of moviemaking.

As for that big blue movie, I recently saw “Avatar” for the third time, and was mildly surprised to find that not only did it hold up, but its pleasures had gotten more pronounced with repeat viewings.

I still have problems with it, no question, but it is so dazzling in many ways, such an extraordinary piece of design and execution, and such an astonishing success on a level that almost nobody could have imagined, that I simply can’t argue with any voter who feels that it deserves his or her vote.

And, you know, most of the other movies in the mix deserve to be there as well. I thought “An Education” and “Up in the Air” were deft and moving, I was thrilled by “Up” and surprised by “District 9,” I shook my head at the caustic nerve of “A Serious Man” and I thought “Precious” was undeniably moving.

The filmmakers behind the top movies have (at least in public) been magnanimous and friendly and supportive of each other. And the rest of us, I suspect, really ought to take our cue from that in the little time that remains. (And then, come March 8, we can complain that the wrong film won if we want.)

Yes, I know that I’m being naive. Yes, I still want “The Hurt Locker” to win, and I’ll still cross my fingers that it does. But maybe that’s it: maybe it’s time to cool down, chill out, and remember that it’s much healthier to cross your fingers than it is to clench your fists.