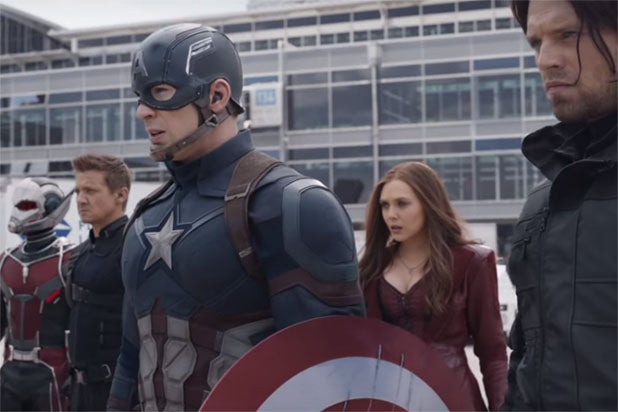 “Captain America: Civil War” did battle at the box office this weekend and won, bringing in an estimated $181.8 million from 4,226 locations, keeping in line with expectations to become the fifth-largest opening weekend ever.

Captain America edged out Iron Man, his nemesis in the film, in terms of box office performance: “Iron Man 3” was previously in the fifth position with a $174.1 million opening weekend. “Civil War” comes in just behind the opening of last year’s “Avengers: Age of Ultron,” which opened to $191.3 million.

Marvel Studios now has four of the top six opening weekends of all time.

The Disney-Marvel movie also had a smashing Saturday, grossing an estimated $60 million to land the fifth highest-grossing Saturday of all-time. It was just behind “Iron Man 3,” which had a $62.3-million Saturday.

The “Captain America” sequel managed the impressive feat of strength by taking “Star Wars: The Force Awakens” down a peg to sixth place in the category. The Disney-Lucasfilm hit grossed $56.7 million in a single Saturday.

“Civil War” unseated yet another film under the Disney umbrella, as “The Jungle Book” came in at No. 2 for the first time in its four-week run, grossing an estimated $21.9 million domestically from 4,144 locations.

“The only thing that’s going to hurt Disney is Disney itself,” Exhibitor Relations senior analyst Jeff Bock told TheWrap last week. “They’re going to run into themselves many times this year. That’s not gonna stop.”

Warner Bros. kitten comedy “Keanu” grossed $3.1 million in its second weekend, playing in 2,681 theaters, and narrowly beat the comedy “Barbershop: The Next Cut,” which grossed $2.7 million from 1,734, from the same studio.

Few movies dared to open against Disney-Marvel’s box office behemoth, save a few specialty box office titles. Critically well received, Fox Searchlight’s crime drama “A Bigger Splash” with Tilda Swinton brought in $110,000 from 5 theaters, for a per-theater average of $22,000. Also winning rave reviews, with a Rotten Tomatoes score of 96 percent, is the Sony Pictures Classics documentary “Dark Horse,” which opened in four theaters to a per-theater average of $1,630.

A Rob Reiner-directed comedy released by Paladin, “Being Charlie,” made $13,650 from four locations, for an average of $3,413. IFC crime drama “Dheepan” earned a per theater average of $11,380 from two theaters.

Centered around superhero infighting, “Captain America: Civil War” holds a solid A grade among moviegoers surveyed by CinemaScore. It has a 91 percent Rotten Tomatoes score — making it the best-reviewed “Captain America” movie.

Distributed by Disney, the film grossed $25 million during Thursday previews, a total that ranks just behind last year’s “Avengers: Age of Ultron,” which earned $27.6 million.

The third installment in the Disney-Marvel franchise brought in $75.3 million on Friday.