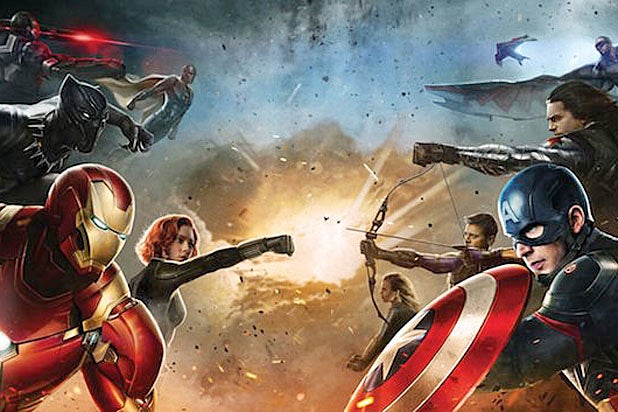 “Captain America: Civil War” is inches away from a major milestone, as the Disney-Marvel sequel is expected to hit $1 billion worldwide once Friday’s box office returns are tallied.

Its weekend-to-weekend percentage declines have so far been in line with those of “Avengers: Age of Ultron,” which took 24 days to cross the coveted billion-dollar threshold when it came out last summer. If it hits the mark on Friday, “Civil War” will have done so in 26 days; it opened in nearly 30 countries on April 24, two weeks ahead of its stateside release.

Both “Ultron” and “Civil War” experienced near-60-percent drops, domestically, following massive opening weekends — and “Civil War” is expected to decline by about 50 percent in its third weekend, much like “Ultron” did. Moreover, the declines of both movies have been similar in international markets.

“Civil War” should bring in $7 million or $8 million worldwide on Thursday — not quite enough to push it over the limit. But Friday returns are typically much higher than weekday box office numbers — by more than 50 percent in the case of “Ultron.” Seeing as how the Cap sequel would only need about $10 million to $11 million to push it over the limit, it will most assuredly be Disney’s first billion-dollar movie of the year.

While Disney is playing coy on the exact timing, the studio’s distribution head, Dave Hollis, talked to TheWrap about this milestone and Disney’s record-breaking year overall. (The studio as a whole passed $1 billion domestically more than a week ago, in just 128 days, easily beating the 165 days that it took Universal to hit $1 billion last year.)

“We’re in the midst of fantastic run,” Hollis said, noting consistent critical success and fan anticipation across the board with “Zootopia,” “The Jungle Book” and “Civil War.”

Disney currently holds an unheard-of 31 percent market share in the box office space — a whole 10 percent more than what Universal ended its record-breaking year with last year. And as we’ve noted in prior reports, the studio is poised to continue that momentum through the rest of the year.

The studio’s end-of-the-year topper is, of course, Lucasfilm’s “Rogue One: A Star Wars Story,” with a whole gamut of potential moneymakers coming out in between.

“This is the culmination a long-term content strategy that started with the acquisitions of Pixar, Marvel and Lucasfilm,” said Hollis, noting that each studio produces high quality from a storytelling perspective.

But Hollis is thinking way beyond 2016: “It sets us up for success this year and many years to come.”