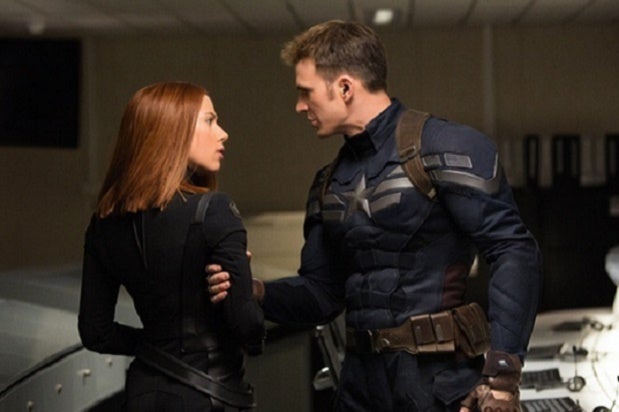 “Captain America: The Winter Soldier” and “Rio 2” are neck-and-neck for the top box-office spot again this weekend, while the faith-based drama “Heaven Is for Real” surged past the dismal debut of Johnny Depp‘s sci-fi tale “Transcendence” on Friday.

Disney’s Marvel superhero sequel has the inside track on its third straight No. 1 finish after a $9.5 million Friday put it on course for a $24 million Easter weekend total. Fox’s animated musical brought $9.2 million and is on a $23 million pace, but the family crowd will determine who finishes on top. Last weekend, “The Winter Soldier” outperformed the singing parrots of “Rio 2” on Saturday and Sunday to keep the top spot. The Blue Sky Studios animated film is in more theaters than “Captain America,” 3,975 to 3,825, and that could make a difference.

“Winter Soldier” raised its domestic total to $184.4 million on Friday, topping the $176 million haul of “Captain America: The First Avenger” in just 15 days. It’s up to more than $520 million globally.

But the real phenomenon this weekend is Sony Tristar’s “Heaven Is for Real,” starring Greg Kinnear as a small-town pastor whose son claims to have seen heaven after a near-death experience. It brought in a strong $7.8 million Friday. Its $3,248 per-screen average in 2,417 theaters that was better than any film in wide release. Since its Wednesday opening, the $12 million film’s estimated total is $14.8 million, and Sony is projecting it will take in $27 million for the five-day holiday weekend.

“Transcendence” brought in just $4.8 million Friday, which puts it on pace for a $12 million three-day total. That’s well below the $20 million pre-release projections for the thriller, which was financed to the tune of $100 million by Alcon Entertainment and China’s DMG Entertainment, and marks Depp’s fourth box-office bomb in a row.

His last major score was “Pirates of the Caribbean: On Stranger Tides” back in the summer of 2011. His turns as Jack Sparrow in Disney’s series of swashbucklers have taken in more than $3.7 billion, but it’s been three years since the last one. “Alice in Wonderland” topped a billion dollars globally, but Disney’s 3D extravaganza was back in 2010.

First night audiences gave “Transcendence” a crummy “C+” CinemaScore, in line with the critics, who have it at 19 percent positive on review aggregation site Rotten Tomatoes.

The low-budget horror spoof “A Haunted House 2” was fifth after taking in $4 million on its first day from 2,310 theaters. Distributor Open Road was projecting a $10 million weekend for the Marlon Wayans-Jaime Pressley comedy, well below the $18 million that the original film debuted with in January of 2013, before going on to take in $60 million worldwide.

Summit Entertainment’s Kevin Costner football drama “Draft Day” held well. Its $2.1 million Friday was off just 40 percent from last week, and puts it on pace for a $6 million second week that would lift its domestic total to nearly $20 million.

Summit’s teen sci-fi adventure “Divergent” and Relativity Media’s horror film “Oculus” followed, and both should finish the weekend with $5 million-$6 million. That would bring “Divergent” up to $133 million domestically after five weeks.

The Disneynature documentary “Bears” brought in $2.3 million in its first day in 1,720 theaters, and is on pace for a $5 million opening weekend.

Two other faith-based movies, “Noah” and “God’s Not Dead,” came next.

Paramount’s Darren Aronofsky-directed Biblical epic brought in $1.6 million Friday and should end the weekend at $4.7 million. That would up its domestic total to nearly $93 million after our weeks.

The $1.6 million Friday take for “God’s Not Dead” was actually up four percent from last week, even though it dropped 102 theaters. It should wind up Easter weekend with around $3.8 million, which would lift the domestic total for the $5 million indie from Pure Flix Entertainment over $47 million after five weeks.

“Fading Gigolo,” the R-rated comedy written, directed and starring John Turturro and co-starring Woody Allen, got off to a good start for Millennium Entertainment with $58,000 from five theaters. If it stays on that pace, it will bring in roughly $177,000 for the weekend, which would be a roughly $35,000 per-screen average.