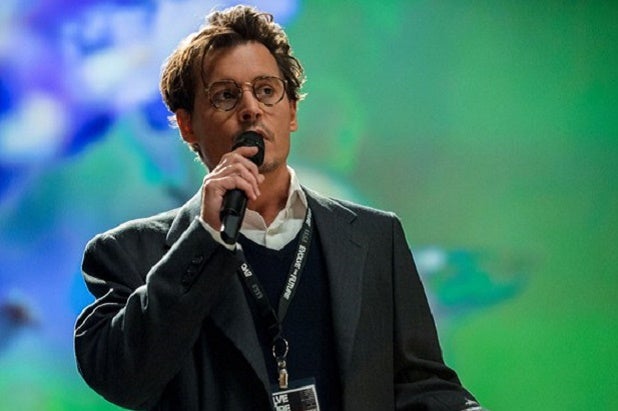 So much for Johnny Depp breaking his box-office slump with “Transcendence.”

His sci-fi thriller got off to terrible start on Friday and looks like it will end Easter weekend with just $12 million, about $10 million under expectations that were modest to begin with for a film with a $100 million budget. On Saturday the film was running fourth behind reigning No. 1 “Captain America: The Winter Soldier,” the family film “Rio 2” and “Heaven Is for Real,” the faith-based family drama that has just opened.

The box-office belly flop for “Transcendence” makes it four straight misfires for Depp, coming on the heels of last year’s “The Lone Ranger,” 2012’s “Dark Shadows” and 2011’s “The Rum Diaries.”

His last major score was “Pirates of the Caribbean: On Stranger Tides” back in the summer of 2011. Depp’s turns as Jack Sparrow in Disney’s series of swashbucklers have taken in more than $3.7 billion, but it’s been three years since the last one. “Alice in Wonderland” topped a billion dollars globally, but Disney’s 3D extravaganza was back in 2010.

The critics don’t like it either — it’s at 19 percent on Rotten Tomatoes — and first-night audiences gave it a lousy “C+” CinemaScore.

“I think he’s become over-exposed in the U.S., not just in the movies, but because of all the celebrity coverage that he has no control over,” BoxOffice.com vice-president and senior analyst Phil Contrino said.

“He’s made some questionable decision in terms of his movie choices, and you string a few of those together and you can hurt your good will.”

Warner Bros. is distributing “Transcendence,” which was financed by Alcon Entertainment and China’s DMG Entertainment and could do better overseas. It will be out in a handful of markets this weekend, including China, where Depp spent several days promoting it.

Contrino said the damage to Depp is not irreversible.

“He’s such a big movie star that all it will take is one big role and he’ll be back,” Contrino said.

Depp has two major Disney projects in the works: “Through the Looking Glass,” a sequel to “Alice in Wonderland,” and the fifth “Pirates of the Caribbean” film — “Dead Men Tell No Tales” — set for 2016.

His immediate follow-ups will roll out much sooner. Kevin Smith’s horror film “Tusk,” the mystery thriller “London Fields” (with Amber Heard), Lionsgate’s crime drama “Mortdecai” and the comedy fantasy, “Into the Woods,” are all set for this fall. Depp is also set to play Whitey Bulger in the mob drama “Black Mass,” which is set for 2015.