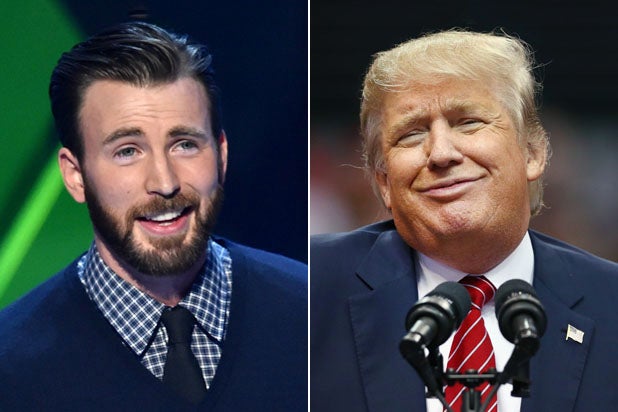 Captain America has a new mission for the Trump era: “to create informed, responsible and empathetic citizens.”

Chris Evans, who stars in the upcoming “Avengers: Endgame,” is launching A Starting Point, a new website aiming to get regular citizens involved in politics.

“You don’t want to alienate half your audience,” Evans told The Hollywood Reporter. “But I’d be disappointed in myself if I didn’t speak up. Especially for fear of some monetary repercussion or career damage — that just feels really gross to me.”

Evans, an outspoken Trump critic, was spotted in Washington D.C. in recent weeks with several lawmakers, including U.S. senators from both parties.

The site, which doesn’t have a launch date, is co-founded by Evans with actor Mark Kassen and entrepreneur Joe Kiani.

In October 2018, following President Trump’s tweet about the “Fake News Media, the true Enemy of the People,” Evans responded by telling his 10 million followers, “‘Help! I’ve never done anything wrong in my entire life, but somehow hostility is at an all time high. Just because I kick beehives all day, it’s not MY fault when people get stung! No one has EVER been treated so unfairly. Sad. Also, where’s Obama’s birth certificate?'”

Evans, a Boston native, also didn’t mince words when it came to New England Patriots quarterback Tom Brady’s past support of the Trump.

“I really hope he’s not a Trump supporter,” Evans told THR. “I’m just hoping he’s one of those guys that maybe supported him and now regrets it.”

“Maybe he thought it was going to be different — and even that bothers me — but maybe there’s a chance now he just thinks Trump’s an absolute dumb shit, which he is,” Evans said. “If he doesn’t, if he’s still on that Trump train, I might have to cut ties. It’s really tough.”