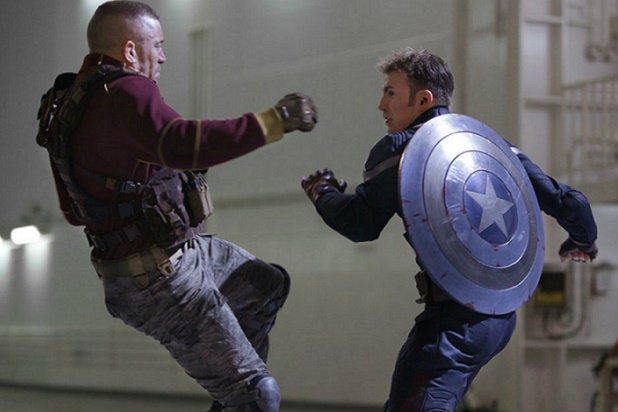 Disney’s latest Marvel superhero saga “Captain America: The Winter Soldier” should get summer off to a great start at the box office this weekend, where it’s expected to take in more than $85 million.

What’s that you say? Summer doesn’t begin until June 21?

Don’t tell Hollywood. When it comes to blockbusters, the studios have been custom-fitting the calendar for years, making May the de facto start of the tentpole season. But this year they’ve gone even further, essentially kicking off the season the first weekend in April.

“I think Disney was really smart picking this date for ‘Captain America’,” BoxOffice.com vice-president and senior analyst Phil Contrino said. “They avoid the summer competition and it should play strongly the whole month. I don’t think that there’s any doubt that you’ll see other studios doing the same thing going forward.”

Disney’s decision to slot “The Winter Soldier” early was made easier when Sony locked up the first week in May for “The Amazing Spider-Man 2.” That’s been a launching pad for Marvel films – from Disney, Fox and Sony – for nearly a decade.

“You look at a number of factors, like what will be the competition, will it have running room to continue to deliver,” Disney’s distribution chief Dave Hollis told TheWrap. “With spring breaks starting, our data shows we’ll have about 11 percent of the students out of school and that number will rise as we get closer to Easter. And with a huge brand and tentpole like this, we think we can create some business where it hasn’t been before.”

Traditional wisdom for years dictated that summer, when kids and college students were out of school and families were on vacation, was the optimal time to release a blockbuster. The studios moved into May more than a decade ago, but Disney elevated that window to new heights with “Marvel’s The Avengers” and “Iron Man 3” the past two years. If “Captain America: The Winter Soldier” opens as big as expected, look for April to become similarly popular.

“I remember when ‘Twister’ came out in the first week of May and that was considered revolutionary,” Fandango’s chief correspondent Dave Karger told TheWrap, recalling the 1996 hit. “Now the summer movie is starting and there’s snow on the ground.

“A true event film will bring in a big crowd regardless of when it’s released,” Karger said. “Dates matter a lot more to family movies, where it really does matter if kids are in school, but for something like ‘Captain America,’ the millennial audience is going to see it on opening weekend, whether that’s in April or July.”

It’s not just the “Captain America” sequel that will give the month a summer feel. Fox will roll out “Rio 2” on April 11 and Warner Bros. has the Johnny Depp sci-fi film “Transcendence” the following week. March releases “Noah” and “Divergent” will still be in the market, too. In terms of direct demographic competition however, “The Winter Soldier” won’t have any until “Spider-Man 2” hits theaters on May 2.

Universal Pictures, which has “Fast & Furious 7” set for April 10 next year and its new take on “The Mummy” penciled in for April of 2016, has been at the forefront of broadening the schedule. The last two “Fast & Furious” movies debuted in May of 2013 and April 2009, respectively.

“We believe in a 52-week philosophy,” distribution chief Nikki Rocco told a gathering of theater owners at the recent CinemaCon convention. “When you have so many movies in the summer and clog that corridor, you’re going to have as many losers as winners.”

That was certainly the case last year, when several big-budget movies like “After Earth,” “The Lone Ranger” and “R.I.P.D.” bombed at the same time that the overall summer box office was setting a record for grosses.

The shift is seen as good news by the exhibition industry, which has been pressing studios to go to a schedule that spaced out the tentpole and family films.

“We could sell even more tickets to those movies if they were spread more evenly throughout the year,” said John Fithian, president of the National Association of Theater Owners said. He noted that Warner Bros. had scored big with “Gravity,” which opened to $55 million in October and went on to take in $715 million worldwide. And two months ago, “The Lego Movie” posted the second-biggest opening ever in February with $69 million.

“We could still use a bit more calendar diversity,” Fithian said. “We had virtually nothing for families in the first quarter of 2013, which resulted in a 12 percent drop in that period. And then we had too many family movies packed into summer time, with some cannibalization,” he said.

Fandango’s advance sales indicate that audiences are indeed in a summer frame of mind. Advance sales for “Captain America” The Winter Soldier” were in line with those of the big June or July blockbusters, and are on track to be the biggest ever in April, the online ticket broker said Tuesday.