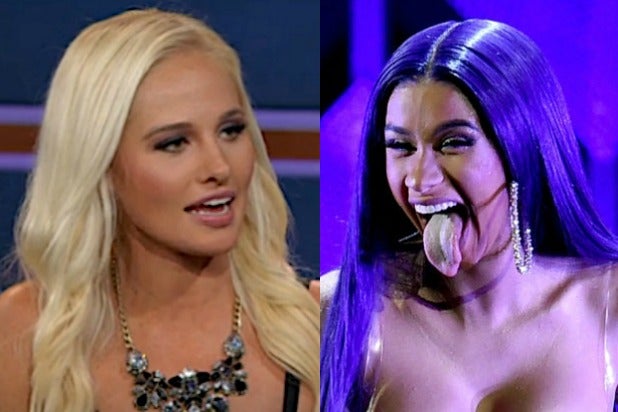 After calling out Donald Trump and the Republicans over the government shutdown, Cardi B is now in a Twitter feud with Fox News commentator Tomi Lahren after the latter mocked her for supporting the Democrats.

The drama began after the rapper posted an expletive-laden video on Instagram Wednesday, calling out the president for refusing to agree to any government funding deal that doesn’t include funding for a wall on the U.S.-Mexico border. The video prompted a response that day from Lahren, who called Cardi the “latest genius mind to endorse the Democrats.“

Cardi responded Sunday by telling Lahren on Twitter to “Leave me alone I will dog walk you,” as in getting dragged around like a dog on a leash.

Lahren swung back, tweeting, “I’m sure you would. Still doesn’t make your political rambling any less moronic. #BuildthatWall”

Verbal punches were thrown back and forth, with Cardi writing, “You’re so blinded with racism that you don’t even realize the decisions the president you root for is destroying the country you claim to love so much. You are a perfect example on no matter how educated or smart you think you are you still a SHEEP”

And the clapback continued, with newly-appointed congresswoman from New York, Alexandria Ocasio-Cortez‏, joining in.

“Why do people think they can mess with Bronx women without getting roasted?” AOC tweeted. “They act as though our borough hasn’t been perfecting the clapback game since the Sugarhill Gang y’all just found it on Twitter.”

Cardi B has a history of voicing her mind on Trump and the state of Capitol Hill on social media and in interviews. In an interview with GQ last April, she said that she is “obsessed to know how the system works” and named Franklin Delano Roosevelt as her favorite president.

“He helped us get over the Depression, all while he was in a wheelchair. Like, this man was suffering from polio at the time of his presidency, and yet all he was worried about was trying to make America great–make America great again for real,” she said. “He’s the real ‘Make America Great Again,’ because if it wasn’t for him, old people wouldn’t even get Social Security.”