Steve Carell hinted a possible early exit from "The Office" in an interview with the BBC, comments that foretell an even more rudderless Dunder Mifflin — or the beginning of yet another contract dispute in the making.

During an interview with BBC Radio’s "Steve Wright in the Afternoon" to promote his movie "Date Night," Carell noted that his contract for "The Office" ends after the 2010-11 season. 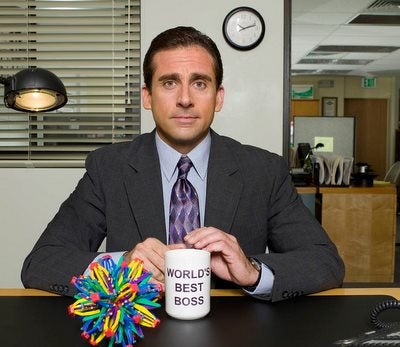 Carell, who has played Michael Scott on the NBC comedy for six years, told Wright, "I think that will probably be my last year" on the show.

Representatives for Carell and NBC did not respond to requests for comment.

It’s unclear if Carell is launching an early bid to renew his contract, or if he’s genuinely ready to leave the sitcom, possibly to concentrate on his feature film career.

"Date Night," in which he stars with Tina Fey, opened April 9 and had grossed $64.7 million domestically through April 27, according to BoxOfficeMojo.

"The Office’s" ratings make it a regular in the Top 20 among all shows, and it’s NBC’s second-highest-rated series among adults 18-49 (after "Sunday Night Football").

Josef Adalian is on vacation this week.