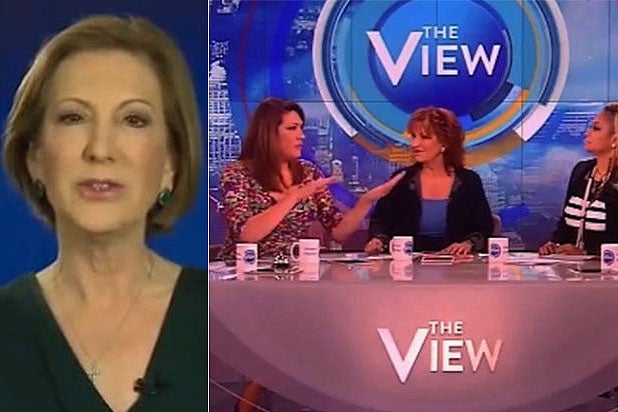 Carly Fiorina is firing back at the ladies of “The View” after they mocked her appearance by saying she looked “demented” at Wednesday’s Republican presidential debate.

“I am tired of being insulted by liberal feminists who talk about women’s issues when the reality is every issue is a woman’s issue,” Fiorina said on “Fox News Sunday.”

“I was on ‘The View’ several months ago, they said none of that to my face,” Fiorina told host John Roberts, adding that the ABC hosts would never say anything like that about Democratic frontrunner Hillary Clinton. “There is nothing more threatening to the liberal media, in general and to Hillary Clinton, in particular, than a conservative woman.”

Former Hewlett-Packard CEO Fiorina then suggested that the ABC hosts are gutless.

“Maybe the ladies of ‘The View,’ if I come back on again, let’s see if they have the guts to say that to my face.”

“She looked demented,” Collins remarked about Fiorina’s appearance at the CNBC debate. “Her mouth did not down turn one time.” Behar then chimed in with, “It looked like a Halloween mask.”

Fiorina isn’t the only woman taking issue with the comments.

“Ladies, come on!” CNN’s Brooke Baldwin said on the air Thursday, as she called out the ABC hosts. “Double standard much?”

“This is a prime example of faux feminism right there,” Hasselbeck said on “Fox & Friends” Friday. “The only woman they support is someone who thinks exactly like they do, it’s a lack of openness and compassion.”

Watch the video of Fiorina on “Fox News Sunday” below.