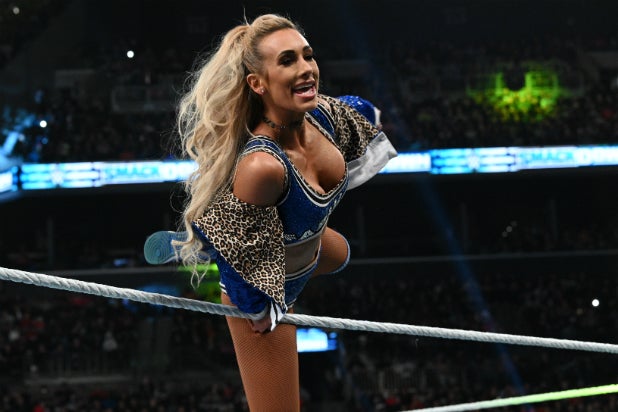 WWE Superstar Carmella is a former Laker Girl and New England Patriots cheerleader, so she’s pretty good on her feet. With her legs, she’s deadly.

Ahead of Fox’s “SmackDown” on Friday and Sunday’s Royal Rumble pay-per-view on the WWE Network, TheWrap asked Mella (whose real name is Leah Van Dale) to (moon)walk us through the development of her “Code of Silence” submission maneuver.

“Well, I’m one of the smaller girls in all of the divisions — even when I was in NXT, which is when I came up with that — so it’s something like, what could I do?” she told TheWrap. “I can’t do a power move. I’m not able to pick every woman on the roster up and be able to do something with them.”

“So what could we do that is believable?” continued Carmella, who is billed at 5’5”. “And really, this hold is for real. Girls have told me like, ‘Oh my God, one more second and I’d have passed out.’ They tell me that all the time, so I know that it’s legit.”

Carmella says she initially developed the hold with WWE trainer Sara Amato, who herself used to wrestle under the ring name Sara Del Rey. From there, the Code of Silence evolved further under the guidance of NXT godfather Triple H, who personally modified how Mella grabs and holds her own foot for torque. His alteration came on the very night the “Princess of Staten Island” debuted on “NXT” TV.

It’s a fairly one-of-a-kind finisher, one that suited Van Dale well over her 131-day reign as SmackDown Women’s Champion. Having such a distinctive move is something hard to come by at this point in the history of professional wrestling, something a second generation WWF/WWE Superstar would know better than most. (Van Dale is the daughter of former WWF journeyman Paul Van Dale.)

“Everyone’s done everything,” Carmella said. “So it’s cool that this is unique to me and no one else has done it before.”