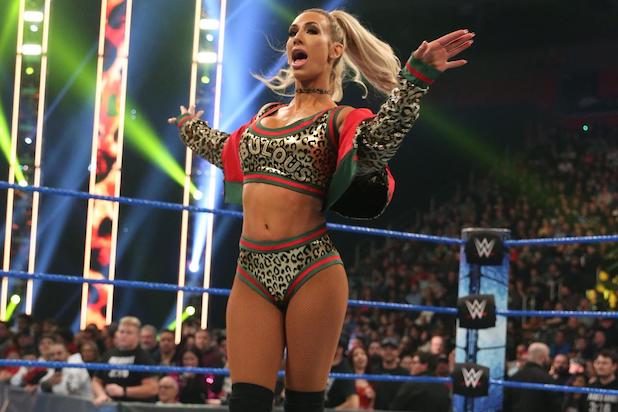 WWE Superstar Carmella is the moon-walking, trash-talking princess of Staten Island, a character complete with the accent, colorful makeup, big hair, gaudy jewelry and all. But the real woman behind the wrestler, Leah Van Dale, is very much a Massachusetts girl.

Van Dale, the daughter of former WWF jobber (a perennial-loser gig that the business now refers to as “enhancement talent”) Paul Van Dale, hails from Spencer, Massachusetts, is a UMass Dartmouth alum, and a former New England Patriots cheerleader.

So how did someone very much from Boston Red Sox country come to represent a very different — yet equally distinctive — borough around New York Yankees land? Former Laker Girl Van Dale, who has the distinction of being WWE’s first Women’s Money in the Bank Ladder Match winner, walked TheWrap through that process.

“When I was first coming up with this Carmella character, I wanted her to be from Boston,” she told us. “However, Sasha Banks was from Boston, so we had to come up with something else.”

“So [the Princess of Staten Island] was what we came up with,” the one-time SmackDown Women’s Champion said. “From that point on I was religiously watching ‘Mob Wives’ and ‘Real Housewives of New Jersey.’ Man, I just did so much character research — ‘The Sopranos,’ everything.”

This Italian-American reporter from central New Jersey can tell you that all of her actor-like preparation has paid off.

“It’s funny, the Impractical Jokers, Sal and [Brian ‘Q’ Quinn] and them, they’re from Staten Island, obviously. And they’re like ‘Oh my gosh, you do that so good!’ And that makes me feel good,” Carmella, also a star of E! series “Total Divas,” said. “I’m like cool, I can convince people from Staten Island that I’m from Staten Island.”

Yes, it’s like Van Dale moonwalked her way across the Outerbridge Crossing and directly into our hearts.