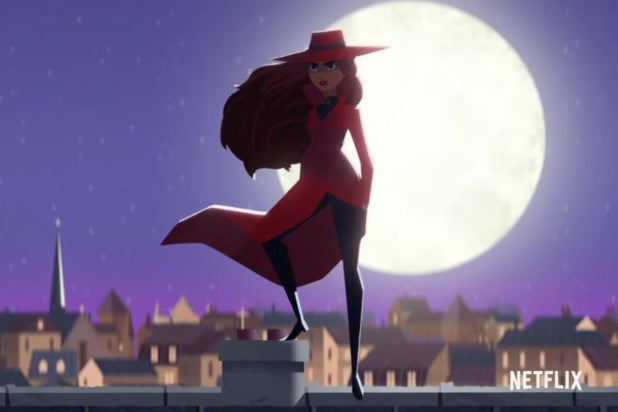 Netflix released the opening credits for its upcoming animated “Carmen Sandiego” series, and it features a theme song that’s quite different from the classic Rockapella tune used on PBS’ 1990s-era game show, “Where in the World Is Carmen Sandiego.”

The new version, which you can listen to below, was written by Jared Lee Gosselin and sung by Raquel Castro.

#CarmenSandiego swings back into action next Friday but you can steal an exclusive first look at the show's new theme and opening credits now! pic.twitter.com/cfwCSNt0o7

Sean Altman, one of the founding members of Rockapella, released a new version of their iconic theme song, earlier this week. And he had a few words for Netflix’s decision to go with their own theme. “Just in time for it NOT to be the theme song to the new @netflix series! Original theme writers Sean Altman (ex-@RockapellaMusic) and @DavidYazbek (@TootsieMusical, @TheBandsVisit ) have re-created their iconic song ‘Where In The World Is @CarmenSandiego?'”

Just in time for it NOT to be the theme song to the new @netflix series! Original theme writers Sean Altman (ex-@RockapellaMusic) and @DavidYazbek (@TootsieMusical, @TheBandsVisit ) have re-created their iconic song "Where In The World Is @CarmenSandiego?" https://t.co/AATkfnado8

The PBS show’s theme song was a hit and Rockapella gained notoriously as a result, even landing an appearance on Jay Leno’s New Year’s Eve “Tonight Show” broadcast in 1992.

Netflix’s series stars Gina Rodriguez from “Jane the Virgin” as the globetrotting thief, with “Stranger Things” star Finn Wolfhard lending his voice. The  logline for the series is: A master thief who uses her skills for good, Carmen Sandiego travels the world foiling V.I.L.E.’s evil plans — with help from her savvy sidekicks.

The 20-episode season will premiere on Jan. 18, which will be followed by a live-action version of “Carmen Sandiego” on Netflix that also stars Rodriguez.

“Carmen Sandiego” first began in 1985 as a series of educational computer games titled “Where in the World Is Carmen Sandiego” before rising in popularity in the ’90s with a pair of PBS game shows and an animated series. The film adaptation of the educational series is expected to hit in 2019. Rodriguez is producing the feature-length film through her I Can and I Will banner alongside Kevin Misher and Caroline Fraser, with Andy Berman as executive producer.