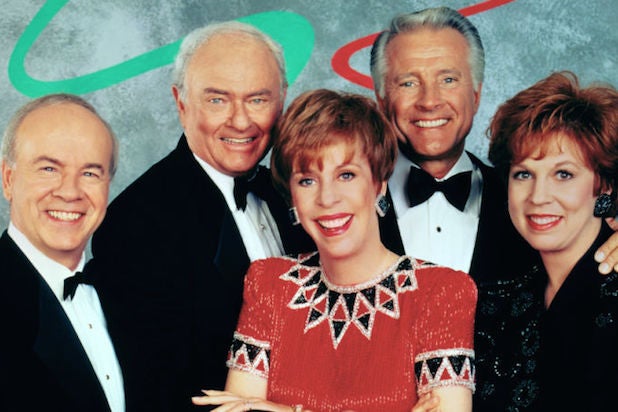 The “Carol Burnett 50th Anniversary Special” drew enough laughs to post an impressive Sunday night audience — but it would have needed more for CBS to outshine NBC on the evening.

A strong NFL game between the Philadelphia Eagles and Seattle Seahawks carried NBC the top of the Nielsen ratings, though the Burnett reunion did boast a shining score in total viewers for an entertainment special.

NBC finished first in ratings with a 4.6 rating/16 share in the advertiser-coveted 18-49 demographic and in total viewers with an average of 14.2 million, according to preliminary numbers. Following the network’s three-part “Football in America” program at 7, the Eagles vs. Seahawks game grabbed a 13.1/22 share from 8:30-11:30 p.m.

Univision was fifth in ratings with a 0.4/1 and in viewers with 1.2 million.

We've already learned that just six entertainment (so, no sports or news programming) TV shows across the Big 4 broadcast channels were able to grow their audiences from Fall 2016 to this season -- but which ones are actually falling the hardest? TheWrap's got that answer for you today, and we've ranked them in order from bad-to-awful.

Unfortunately for Fox, the newest of the networks (again, we're leaving The CW alone here) owns each of the three worst year over year total-viewer drop-offs. All numbers in this story comes from Nielsen's "most current" metric, which includes a week's worth of delayed viewing where available.

Also Read: How Matt Lauer’s Firing Could Impact ‘Today’ Show in the Ratings