Sandy Powell had never read anything by Patricia Highsmith when she picked up the author’s “Carol” while looking for something to read before boarding a train several years ago. “I thought I was going to get a thriller,” she said, surprised to find that the book was instead a semi-autobiographical tale of two women who fall in love in 1950s New York, originally published as “The Price of Salt” under a pseudonym.

And now “Carol” is a Todd Haynes film, starring Cate Blanchett and Rooney Mara and featuring the costumes of three-time Oscar winner Powell, who also designed Haynes’ “Velvet Goldmine” and “Far From Heaven.” “He’s incredibly visual, and meticulous to the point of obsession, in a good way,” she said of the director, who provided the cast and crew with an extensive “look book” of the film’s visual style.

For Mara’s character, Therese, Powell said she looked for clothing that leaned to dark colors and wouldn’t have cost a lot of money. “She’s a shopgirl, probably recently out of art school — she dresses practically, for comfort, but with a touch of bohemian-ness. And then at the end of the film, when she gets a good job, I assumed that she spent her first wage packet on a new outfit.” 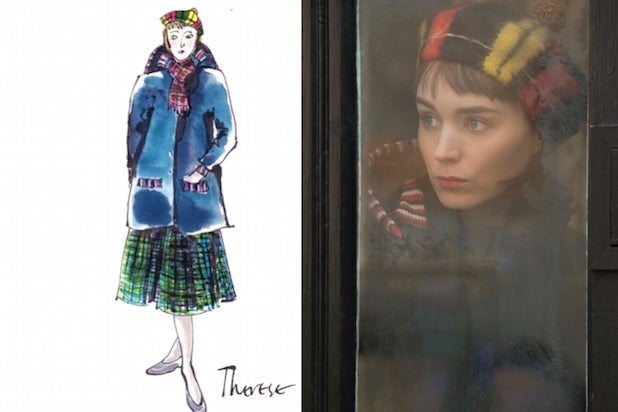 For Cate Blanchett‘s title character, Powell wanted the clothes to “place her in her world” of privilege. “But I also wanted to use a paler palette for her–she doesn’t ever wear black or anything too dark.

“And for the first time that Therese sees her in the department store, it was really important to me that Carol be wearing a pale fur coat, and not a brown fur coat. That was one of the few things that was definite to me from the start.”

Powell talked a lot with Blanchett about the look of the character during the seven months the two were working on “Cinderella,” and Blanchett credits those conversations with helping her understand the character.