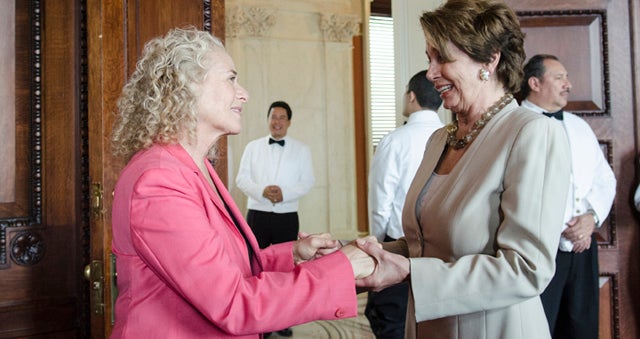 Washington is truly feeling the earth move this week as singer-songwriter Carole King is honored with the Library of Congress’s Gershwin Prize for popular song and then saluted in two concerts, one in the White House.

King is becoming the first female songwriter to win the prize, which was won by Stevie Wonder in 2009, Paul McCartney in 2010, and the songwriting team of Burt Bacharach and Hal David in 2012.

On Tuesday, the singer, whose album "Tapestry" was on the biggest sellers in the 1970s, was honored at a luncheon, attended by Speaker of the House Nancy Pelosi (above). That was to be followed by a concert with performances by Patti Austin, Colbie Caillat, Michael Feinstein, Siedah Garrett, her daughter Louise Goffin, Shelby Lynne, Gian Marco, Arturo Sandoval and King herself.

On Wednesday, President Obama and First Lady Michelle Obama formally present the award to King and host their own concert in the East Room. The White House concert featuring Gloria Estefan, Billy Joel, Jesse McCartney, Emeli Sandé, James Taylor and Trisha Yearwood as well as King is due to be televised by PBS.

The Gershwin Prize commemorates George and Ira Gershwin, the legendary American songwriting team whose extensive manuscript collections are in the Library of Congress. The prize is awarded to musicians whose lifetime contributions in the field of popular song exemplify the standard of excellence associated with the Gershwins.